This week’s hottest objects include an electric bike, the worlds most expensive headphones and a $1million cigar humidor

The laminated wooden seat is the showstopper of this electric bike. But rivalling its appeal is the 100 horsepower electric motor beneath it that moves this 167-kilogram machine from 0-100 in just 3.5 seconds. Just keep in mind that opening up the throttle wide means you won’t get very near the approximate 160-kilometre range of the 101.1 kilowatt-hour battery. Incredibly, a fast-charging mechanism means that the bike can charge up in just 30 minutes. In a clever twist, the speedometer and other gauges from the handlebar have been replaced with a smartphone that displays all of the bike’s vital stats, including range and speed.

It may be time to kick that fuel-guzzling V-Twin to the curb. 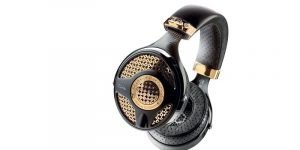 French audio specialist Focal unveiled the world’s most expensive pair of headphones earlier this year. At $120,000 you’d expect unmatched sound quality, which Focal says took them 35 years to perfect, but also a fair bit of bling. This headset delivers on both fronts. Maison Tournaire, a French family-run jewellery house, collaborated with Focal to kit this pair of headphones with 18-carat gold and six-carat diamonds. A portion of the proceeds will be donated to an 8-year-old boy named Louis Biscini, who is suffering from a rare spinal disease.

Porsche Design that has made some of the world’s most beautiful consumer objects, not entirely unrelated to Porsche’s automotive division, has debuted this laptop/tablet hybrid. The slick, aluminium-bodied 15.9 mm-thick machine has a precision touchpad that responds to gestures and a 13.3 inch-high-res touch display. To avoid fingerprints all over, an aluminium pen comes bundled with the laptop. The ventilation grilles on the side are modelled after a car grille, and the hinges connecting the screen to the keyboard are inspired by a gearbox. They allow the screen to rotate backwards 360 degrees as well as detach completely. 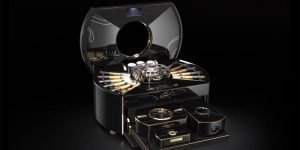 One of the world’s most expensive cigar humidors made by the Geneva-based firm borrows on another tradition steeped within the Alpine country’s veins: watchmaking. The piece features a tourbillon timepiece with 323 moving parts designed specifically for the humidor. Then there’s the built-in cigar-cutting mechanism guided by a laser, a lighter that burns the cigar uniformly and an automatic ashtray that opens when it senses a cigar nearby. The chest has space for 24 cigars and comes shipped with an equal number of gold leaf-wrapped Cuban smokes that have been aged for four years.