German industrial product designer Ballfinger has dropped a new collection of audio equipment. At the very top of that collection is this flagship Tonbandmaschine M 063 reel-to-reel tape machine that is also believed to be the first all-new analogue tape recorder to break cover in the last 25 years.

Unveiled at the Norddeutsche HiFi-Tage 2017 audio exhibition earlier this week, the retro-cool recorder operates at 38cm of tape speed per second. We gathered the technical details from audio-specialist publication What HiFi who said that it “packs a three-motor drive that runs at 7.5 or 15in per second, and takes up to 12in tape reels.” 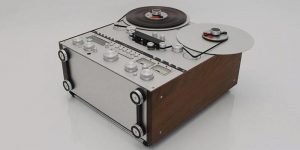 The recorder can be operated while placed upright or on its back too.

This vintage-vibing machine is backed by ultra-modern technology. The super-accurate digital counter in the front calculates the elapsed time down to the precision of a hundredth of a second. The controlled winding speeds and processor controlled drive prevents the reel from slacking, stretching or looping. 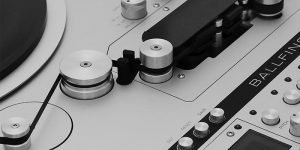 The player was unveiled at the Norddeutsche HiFi-Tage 2017 audio exhibition.

The entire chassis of the 2-channel tape recorder from Ballfinger has been made from aluminium that lends it greater stability. Its sides are lined with wood and the device can be operated while placed upright or on its back too. Naturally you’d want to place this in dust-free – preferably temperature-controlled – corner of your mansion as the reel is open (as opposed to being cased-off in a cassette) to the elements.

Ballfinger is a fairly new company. Dusseldorf-based industrial designer Roland Schneider founded the company in 2005. He began by making an angelpoise lamp, and by 2010 went on to debut his own brand of watches fitted with Swiss movements. Five years ago, Schneider decided to have a go at audio equipment and this is his debut collection. The reason that it took this long is because he decided to manufacture the majority of the key components himself. As a result, the drive motors, pick-up systems and servo units of this tape-to-tape reel machine are all produced in-house. Apart from the tape-to-tape reel player, Schneider also exhibited two other pieces of equipment at the audio show. There was a turntable called Schallplattenspieler PS 2 and a standalone amplifier. He claims the turntable is “the first record player whose radial arm has been combined with a processor-controlled linear guide.” 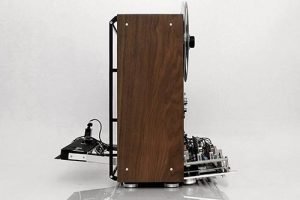 Priced at $29,000 the tape player, is definitely for the audiophile with deep pockets. If we were to sum up our opinion on this gadget in a word, we’d just say it’s downright baller. Agree?