Peruvian food is having a moment and it’s not just in Dubai. Over the past decade the Peruvian government have been busy promoting its cuisine worldwide and it seems to be paying off. There has been an explosion of Peruvian restaurants popping up in cities around the world including Dubai, where there’s just under 20 restaurants offering a taste of Peru. However, none are as authentic as Lima Dubai, according to its co-founder and Michelin star chef Virgilio Martínez.

Martínez who is featured in Chef’s Table: Season 3, currently streaming on Netflix, also owns Central restaurant in Lima, Peru, which is number four on the World’s Best 50 Restaurants list. It’s the epicentre of his culinary creativity. He executes dishes, alongside his wife Pia, that showcase the diversity of Peruvian ingredients culminating in an 18-course tasting-menu like no other. The altitude of the ingredients dictates each course – from the sea to the mountains. 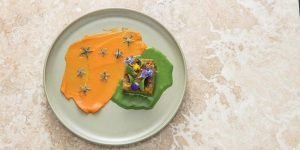 Martínez scours the Amazon and Andes in search of authentic Peruvian ingredients and takes pride in finding new cooking techniques with the help of the locals whether it’s 5,000 meters up in the mountains or in the pouring rain in the rainforest. His foliage is then put under the microscope at his ‘interpretation lab’ that is attached to the restaurant, where Martínez’ sister Melena is head of research.

After meeting his business partners, brothers Gabriel and José-Luis Gonzalez, at a food festival in Spain a few years ago, Martínez decided to open his first venture outside of Peru. He says the idea was to showcase Peruvian food but “in a more casual way” than he does at Central. In 2012, they opened Lima in London, as a tribute to the food of his home capital city. Two years later, it won a Michelin star. 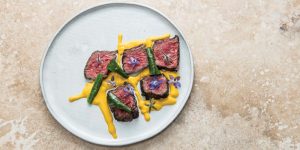 Describing the concept of Lima, which he has now replicated for his new restaurant in Dubai’s City Walk fine dining courtyard, the 39-year-old chef says, “This is the type of food that I’m craving, it might look like a fine dining setting but it’s casual food that is being served right now in Lima.” The culinary showman admits that he was flooded with offers from around the world to open a second outpost of Lima but he chose Dubai because of its ‘good relations’ with his home country. “I had to have a guarantee that I could get my produce and ingredients delivered to Dubai and once I had that, I made sure that my staff from Peru would be able to work here without any problems. After this I knew I have the products and the expertise.”

He also claims that it’s much easier to transport Peruvian ingredients to Dubai than it is to his restaurant in London. “It’s far more difficult for us in London to get our ingredients there because they just don’t have the same relationship between their country and Peru as they do here.”

If ever there was a chef who obsesses over ingredients, it’s Martínez. His dishes in Central can contain up to 50 ingredients, some not even officially recognised as food items. While he still intends to bring different varieties and colours of indigenous potatoes, corn and quinoa to Dubai from his producers in Peru, he says he will be much more relaxed in his approach to cooking in Lima Dubai.

“I have to be calm. What I do at Central is very extreme. We use products that don’t exist, they don’t have any value in the market, we are experimental,” he says. “Lima Dubai will only use products that I know can travel well and they’ll be sourced from the same producers that I’ve worked with for years from all over Peru. But these products will still be new for the customers in Dubai, they won’t have tried them anywhere else,” he said.

For Martínez, the produce coupled with the fact that they are the only Peruvian owned and operated restaurant in Dubai is why Lima Dubai stands out from the Peruvian pack. Although he does speak favourably about one of the city’s other Peruvian restaurants.

So if the sap of a Peruvian tree and algae from a lake in the Andes is off the menu, what can customers expect? “The good thing is that I live in Lima city so whatever is happening there in terms of gastronomy and food, I’ll bring this to Dubai. I’m serving what I eat every day. Like ceviche but with an innovated twist, vegetables and stews, Tiraditos that have a Lima modern twist.” And his favourite dish, sautéed veal sweetbread with hot rocoto tiger’s milk. 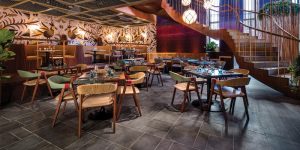 The father of one, who turns 40 this year, said that he never intended to become a famous chef but now that he is, he takes the responsibility seriously. “We try to bring our culture and all of our ingredients and people from different disciplines together. Every time we travel to different parts of Peru, we work with the communities and cook with the locals it’s the only way we can give something back,” he said. But he admits that his work is “contradictory” as parts of Peru still suffer from food shortage due to poverty and the aftermaths of years of terrorism. “Our work is very social, we still have issues with food in my country, there is hunger and poor nutrition, yet we have very healthy good food but it’s very expensive for fine dining and there is people with very little so we work with these people.”

He admits that he won’t be slowing down either in his fourth decade even though he struggles with the work-life balance. “It’s very difficult. I can’t slow down, I feel there is an obligation to my team. We’re doing something good and people are coming to Lima city now just to eat, we’re big promoters of our culture and our food so I can’t just step away from that. It wouldn’t be respectful, I’m proud to work in Peru and I don’t want to loose that.”