Indian food in Dubai has been constantly trying to raise its game. Carnival by Tresind hit upon the idea of serving up modern twists on traditional Indian recipes and serving it with a side of theatre. Here, we visit the restaurant that claims to have captured the “post-modern” Indian food scene in Dubai.

The locale: Located in the Burj Daman, it’s a stone’s throw away from the main DIFC complex. Burger & Lobster and The Artisan, located within the same building, are its culinary neighbours.

The setting: While its elder sibling Tresind in Nassima Royal Hotel pulls out all the stops with a fine dining concept, Carnival by Tresind, as its name indicates, is a more festive, preppy eatery filled with quirk and colour. There are multi-coloured chairs, wait staff welcome you by shooting bubbles from a child’s water gun at your table and you can sit in bright pod-shaped cubicles that allow for privacy. 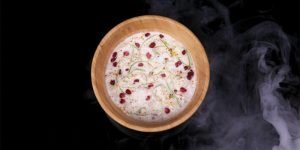 Claim-to-fame: Molecular gastronomy. There are several restaurants that have experimented in molecular gastronomy in Dubai, but Carnival’s playground is Indian food. It’s food that’s designed to trick and treat your senses. 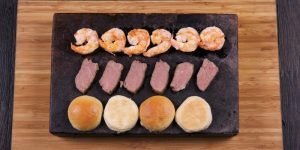 Small-bites: The amuse-bouche served was a pink pani-puri, with the tangy-sweet water served up in a test tube – an indication that the rest of the meal would be an experiment. Next up was dahi wada and that’s where the theatre began. Yoghurt mousse was infused with liquid nitrogen at our table. Lentil dumplings were dropped into the yoghurt and even through the sub-zero temperature of the preparation, you could still taste the familiar ingredients of chilli and mint that you’d remember from the way your grandma cooked this snack once upon a time. 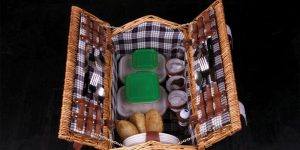 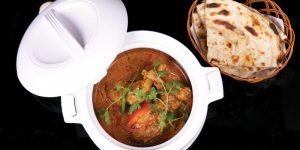 Mains: The first dish was called Into The Wild. The chef lugs a trolley to our table. On it is a Himalayan salt slab that has been pre-heated to 300 degrees. It’s so hot that the moment he places a few raw prawns and slices of beef on it, we see it sizzle to completion in less than three minutes with a dash of chilli olive oil added to it. A strawberry sorbet cleanser didn’t signal that dessert was on it way – instead it was time for a few more mains. This included a country-style cooked chicken curry, another prawn curry and a full-sized checked azurmendi picnic hamper filled with fried potatoes, chole – chickpeas – in a fiery gravy, and more yoghurt to douse any possible fires that may erupt on your palette. 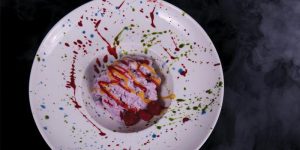 Sweet endings: Fruit custard here meant a watermelon diced in half and hollowed out. Inside, the blueberry custard is first infused with nitrogen stored at minus 190 degrees and then served up with a few cut fruits thrown into the mix. There’s one more dessert before we leave and it’s a cookie brought on an oven tray itself. On top of it, is a scoop of cinnamon ice cream, caramel and little heart biscuits.

Verdict: There’s a relaxed ambience conducive to a family meal, or even date night. There’s plenty of drama and flair in presentation that makes coming here something more than just a passive dining experience. The preparations, although experimental to a large degree, don’t disappoint as they never stray disappointingly far from the food you’d cook in your kitchen – if only you had liquid nitrogen, a blowtorch and a Himalayan salt slab at hand.