Why The Oscar Goes To Myself

When Matthew McConaughey scooped his first Oscar at the age of 44, he thanked his future self for being his inspiration. GC talks to Hollywood’s Johnny-come-lately about the road to success and his role in the award-winning Dallas Buyers Club

Anyone who knows him, or has spent the tiniest modicum of time in his company, knows Matthew McConaughey has a thing for the open road, the call of the wild.

When he first gained serious notoriety for the 1996 adaptation of John Grisham’s legal bestseller A Time to Kill he bought a one-way ticket to Peru, where he hiked Machu Picchu and canoed the Amazon. But mostly, he is on the road.

“Most of the time on a road trip, I’m just driving. That’s my favourite place to think, or not think. I don’t go away to think about something, but I like to put myself in a place where answers sort of show up. My favourite place for that is behind the wheel, heading somewhere,” he says.

As McConaughey’s unusual acceptance speeches have demonstrated (he invoked Neptune for his Screen Actors Guild best actor award and thanked himself for his best actor Oscar) this is no conventional movie star. But surprisingly, McConaughey, 44, is all for recognition – which is just as well, given he has scooped an Academy Award for playing the HIV positive Aids treatment pioneer Ron Woodroof in Dallas Buyers Club.

“I definitely believe it is completely fair to have measures of excellence in the arts. Some people say you can’t judge art, but that is like saying 12-year-old Jane Doe’s diary is as good as Shakespeare,” he says.

How is McConaughey finding it, winning and winning again? “Very nice,” he beams, his teeth considerably whiter than they were when we first met at a hotel in Austin, Texas, in 1998. “If I’m in the conversation, that’s cool.” He was chewing tobacco back then but he was affable, funny, sincere and memorable. 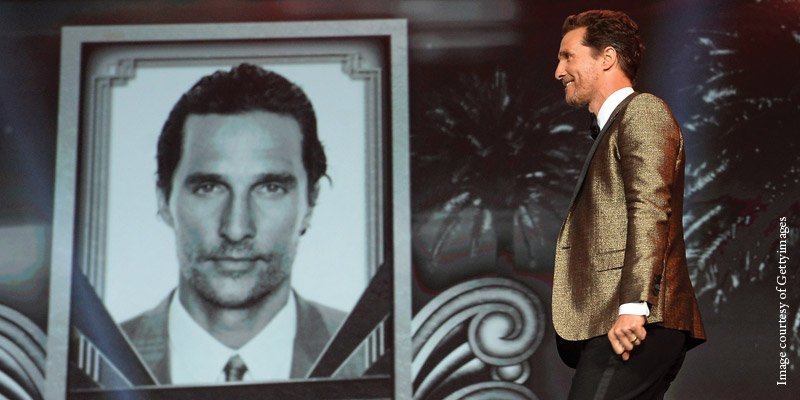 Today in Los Angeles, McConaughey, in an exquisite, expensive black leather biker jacket and slightly orange thanks to make-up from an earlier round of TV interviews, has a nasty-looking graze across the knuckles of his right hand. He is not forthcoming about the cause beyond “a stunt”, presumably on Interstellar, which he is currently filming for Christopher Nolan with Jessica Chastain and Anne Hathaway. His face is still slightly gaunt from losing 47lbs to play Woodroof.

These days, with wife Camila Alves, 32, and children Levi, five, Vida, four, and Livingston, one, in tow, McConaughey has presumably progressed from the iconic silver Airstream trailer he towed all over America and also lodged in for extended periods at a Malibu trailer park.

“My living space is so small that I can sit on the toilet and scramble eggs at the same time,” he once joked. “How cool is that?” A trailer park as a permanent address, even one in Malibu, eventually ceased to be viable, not least because his family expanded rather rapidly.

McConaughey met Alves in 2006. A Brazilian who had arrived in the US to visit her aunt at 15 and never left, Alves has been modelling since her teens, worked as a TV presenter and designs a line of handbags with her mother. With romance sorted (he and Alves married in Texas in June 2012), McConaughey’s career also soared.

After an almost two-year break from cinema while he was attending to fatherhood, McConaughey came storming back out of the gate in 2011 with The Lincoln Lawyer – or at least out of the back of a chauffeured, battered Lincoln Town Car, his unorthodox criminal defence lawyer’s ‘office’. Killer Joe, Magic Mike and the much-admired Mud continued what Hollywood circles called “the McConaissance”.

“I just needed to let time catch up with me,” he noted at the time of that first acclaim in the 1990s. Time, it could be said, has at last caught up with McConaughey who, when remotely possible, has been holed up in the comparative sanctuary of the family’s 1,600-acre working ranch in west Texas.

As if the Dallas Buyers Club buzz isn’t overwhelming enough, he is also riding the wave of The Wolf of Wall Street’s success, given his scene-stealing role as Jordan Belfort’s (Leonardo DiCaprio) chest-thumping mentor. And he has a new hit HBO TV series airing, True Detective, in which he plays a tortured detective opposite long-time friend Woody Harrelson. Is there anything to which he attributes this sea-change?

“Part of it is just growing up and part of it is I’m very turned on and excited about all kind of things. Probably more things now than I used to be. I work hard to maintain the good things in my life that I’ve built – friendships, work, family, my own time. Sometimes you’ve got to go, ‘ah man, I haven’t seen my brother in three months’.

But it feels really great when you can think: ‘Boy, all my relationships are good, people that I love are good and my relationship with them is good. My career, I’m dialled, it feels good. Health is good.’ But to maintain that, when things change, you’ve got to be nimble at times.”

Calculated or not, this career recalibration could not have been better timed. As recently as 2009, McConaughey was starring in rom-coms with titles like The Ghosts of Girlfriends Past, Fool’s Gold and Failure to Launch. But McConaughey is not haunted by past films nor ghosts of girlfriends past (he previously dated Sandra Bullock, Penelope Cruz and Ashley Judd and remains friendly with them all).

“I have a few things I would like to say,” he announces, teasingly. “I’m not selling but I’m angling with our minutes.” And he is off. McConaughey, in that lilting Texan drawl which is somehow exactly the way you imagine it should be, could talk for hours about Woodroof and Dallas Buyers Club. Unchecked, he actually would.

McConaughey saw the screenplay years ago and since then couldn’t shake off  “the fangs” of Woodroof, whom he described as “a cantankerous b*****d with a wicked sense of humour”. Determined to get the script to the big screen after it had been rejected over the years by numerous studios, McConaughey decided to finance the project, ending up with a $6 million budget, a tiny figure by Hollywood standards and filmed it over 25 days.

Finding the voice of Woodroof was his next challenge. “There were hours and hours of tapes and transcripts from our screenwriter Mark Borten’s conversations with Ron. Watching those was really, really helpful. Seeing what he says and seeing what he doesn’t say. His wit and humour were right there, then all of a sudden he’d pop into a conspiracy theory and then pop right back. He would be all over the place, completely convinced the whole time. He was a smuggler and a dealer. He wanted to be Scarface.”

But still, McConaughey hadn’t “found” Woodroof, until the subject’s family intervened with what the actor calls “the secret weapon.” “His family gave me the diary he kept up to before he got HIV. That gave me this dialogue he was having with himself because the tapes were from after he had the Dallas Buyers Club.

“The diary was: ‘I got nothing to do. I got up again this morning, six o’clock, I had my coffee. I tucked my shirt in, pressed my pants, waited for my pager to go off, to get a call, get a little job done and nobody called. So damn it – I got to get high.’ Seeing who he was before he got HIV really informed me because here is a guy who turned 30 days of life, as he was told, to seven more years. That was the first time he had purpose in his life, ironically because he was having to fight for his life.”

McConaughey gives an impassioned performance in Dallas Buyers Club. He credits an anonymous friend, who has since died, with showing him the power of that formula in action. “He was going through a battle with cancer and as the cancer started eating away at his body, I saw his fight coming out more ferociously, not receding.”

McConaughey’s own fight is ferocious too. If his earliest career plan was to be a criminal defence lawyer, fighting for others, his eventual plan has come full circle to fighting for himself. “I’d say I have more of a selfish desire now when it comes to work,” he admits. It has been a long time coming.

I work hard to maintain the good things in my life that I’ve built ‐ friendships, work, family, my own time.

McConaughey, a Texan native, was set to start law classes at university when he felt something was not right and decided to switch to film. “I remember that call to mum and dad and after about a 20-second pause, they were very supportive. They liked the hope, the individuality I took.” McConaughey had never considered acting and as far as he knew, there was not a whiff of artistic temperament in the family.

“But then after my dad passed away [in 1993, six days into shooting Dazed and Confused], I found all these old paintings and pottery he had done. So there was something artistic in the blood line that I didn’t know about. It was neat to find out those things.”