The $1 billion development will involve building two Star Wars-themed areas, one each at Disneyland and Disney World, scheduled for completion by 2019.

Construction on the Star Wars Land – the largest single-themed expansion project Disney has ever undertaken – is well underway. Disney CEO Bob Iger confirmed last week that two 14-acre Star Wars-themed areas – one each at Disneyland in Anaheim and Disney World at Orlando – will open to the public in 2019. At the moment, both these locations feature only a Star Tours ride that takes guests on a trip across two planets guided by protocol and etiquette droid, C-3PO. 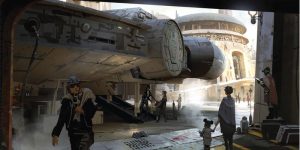 The signature ride will be the Millennium Falcon. Visitors will be able to pilot the spaceship.

Rumours that Disney would eventually capitalise on its 2012 $4billion acquisition of Lucasfilm were rife for several years. Although the groundwork on this new development began as far back as April last year, it was only last week that the Disney boss indicated a firm timeline for its completion. It is estimated that the expansion will cost at least $1 billion. 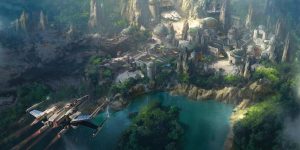 There will likely be the (blue) Resistance X Wing spaceship attraction too.

The man tasked with bringing the reel world to the real world is Disney’s Imagineer Scott Trowbridge. He told D23, a Disney fan club, that the experience would be full of “humanoids, aliens and droids” and hinted at a 4D experience multi-sensory experience wherein visitors will be able to answers questions like “What does the street feel like? What does that animal smell like? What does blue milk taste like?” 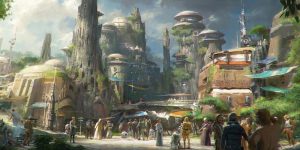 In 2012, Disney acquired Lucasfilm for $4 billion.

The signature ride at the park will be the Millennium Falcon where visitors will be allowed to pilot the spaceship – and yes, shoot canon lasers into space too. Additionally, visitors will also find themselves in the midst of a raging battle between the First Order and the Resistance. Apart from the Millennium Falcon, there will likely be the Resistance X Wing spaceship attraction too, and the famous Cantina tavern will serve up some intriguing cocktails on the side. 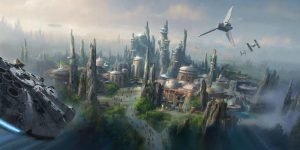 The cost of the project is estimated at $1 billion.

These artist renderings give you a fair idea of what this mythical galaxy will look like upon completion. There will likely be more clues to be found in the upcoming Star Wars film slated for release next year.