In conversation with: Samuel L. Jackson

Hollywood superstar Samuel L. Jackson grew up in a segregated America, was a self-confessed addict and admittedly anti-establishment. Here’s how that explosive mix gave rise to superstardom.

“People tell me I’m in every movie ever made,” laughs Samuel L. Jackson. “Somewhere, somehow, I’m a part of every movie made since I got to Hollywood.” The American actor may be playfully exaggerating, but Jackson’s joke riffs on his reality as one of Hollywood’s hardest working and most bankable stars. Jackson’s films have grossed an incredible $4.6 billion – a figure only topped earlier this year by Harrison Ford – in large part because, even now aged 67, he simply never stops, clocking more than 150 roles in the past 30 years, a work-rate of five movies a year.

Few will be unfamiliar with Jackson’s vintage roles in Pulp Fiction, Die Hard with a Vengeance, the Star Wars prequel trilogy and, most recently, across the Marvel franchise. But these blockbusters came well into Jackson’s forties, his earlier cinematic CV littered with demeaning extra roles – credited variously as “Gang Member No.2”, “Black Guy”, “Hold-up Man” and even simply “Bum” – a list which says a great deal about the prospects for black actors in Hollywood of the 1970s and 1980s.

Raised in segregated Tennessee by his grandparents and aunt, a performing arts teacher, Jackson was thrust onstage from an early age. After studying marine biology at Atlanta’s Morehouse College – a liberal all-male arts institution famous for educating African American leaders including Martin Luther King Jr, Jackson moved to New York to work in theatre. As a member of the feted Negro Ensemble Company, he starred alongside Denzel Washington in the group’s historic first production of Charles Fuller’s A Soldier’s Play, which won the 1982 Pulitzer Prize for Drama. Caught in the middle of Broadway’s black theatre boom, Jackson worked the stage alongside Morgan Freeman, Laurence Fishburne and Wesley Snipes, watching as his peers were “plucked off, one-by-one” to Hollywood fame. Yet Jackson’s own early forays into film were disrupted by a crippling addiction to alcohol and drugs. 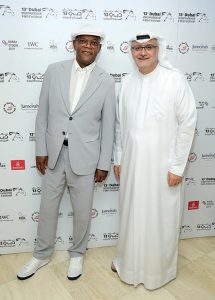 “When I started, the theatre was one of those places where legendary actors were also legendary hellraisers – they were able to drink, use drugs and womanise and still do their jobs. And we all thought that was part of the acting tradition,” he remembers.

When Jackson finally got clean in 1991 his first job, two weeks out of rehab, was in friend Spike Lee’s movie Jungle Fever playing the role of destructive crack addict, Gator. “I was like, ‘Gentlemen, I’ve already done the research,’ ” says Jackson, whose portrayal was awarded a one-off Supporting Actor honour at the Cannes Film Festival, specially invented and never given before or since. “Jungle Fever was the first time I ever performed anything – play, movie, TV show – with no substance in my body,” continues Jackson. “By projecting me onto Hollywood, that role let me know that I had been in my own way – that if I picked up a drug or another drink, then everything I’d just achieved would just vanish as instantly as it showed up. It keeps me sober, and it fulfils my life.”

Now clean and critically established, Jackson’s commercial credentials were sealed three years later with Pulp Fiction, playing the iconic role of Jules, which director Quentin Tarantino wrote especially for Jackson. “That’s the film I can’t run from – and I don’t,” says Jackson, “I embrace it. At least once a day someone says to me ‘Do the quarter pounder with cheese’ [catchphrase].” Jackson’s household fame was built with a plethora of diverse starring roles, from crime drama A Time to Kill to sports biopic Coach Carter and tongue-in-cheek thriller Snakes on a Plane. Meanwhile his continuing collaborative relationship with Tarantino has spawned much of Jackson’s most meaty, memorable work, with starring roles in modern classics Jackie Brown, Django Unchained and The Hateful Eight – three films which each offer a biting commentary on American race relations echoing Jackson’s own social activism.

Born in 1948, 16 years before the landmark Civil Rights Act, Jackson experienced the injustice of a segregated upbringing. In 1968 he was an usher at Martin Luther King Jr’s funeral, and in the early 1970s he flirted with the Black Power movement. “I remember when America had apartheid – I was part of it, I was there, there were places I couldn’t go, things I couldn’t do – and they inform who I am,” he says.

Since finding fame, Jackson has used his public profile to pursue similar causes, most recently speaking out against the proliferation of gun violence in America’s black communities, an issue tackled head-on with his starring role in Lee’s 2015 satirical musical drama Chi-Raq. This year Jackson narrated I Am Not Your Negro, a documentary based on the writings of African American activist James Baldwin.