Three phone bidders participated in the auction that lasted just five minutes. Sotheby’s had a pre-sale estimate of $60million and started the bidding at $56million. Henry Cheng Kar-shun, the chairman of Chow Tai Fook jewellers was one of the bidders on the phone and placed the winning bid.

This isn’t the first time that the flawless pink stone has come up for sale. Three years ago Sotheby’s auctioned it to New York diamond cutter Isaac Wolf for $83million. He defaulted on the amount he owed the auction house, claiming that he was acting on behalf of investors. Even though the sale didn’t take place, contractually Sotheby’s had to honour it’s side of the deal by paying the seller it represented the reserve price for the diamond – $60million – leaving Sotheby’s saddled with very expensive inventory. Last year, it got two other firms Diacore and Mellen Inc. to acquire part ownership of the diamond to offset its own liability on the precious stone. 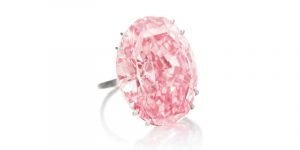 The diamond was minded by De Beers in Africa in 1999 and took two years to cut and polish.

This time around when it came to offering the stone up for auction, Sotheby’s were cautious. They thoroughly vetted the financial credentials of the three bidders that participated in the sale.

The diamond was mined by De Beers in Africa in 1999 and took two years to cut and polish. By 2003 it was unveiled to the public for the first time and was later exhibited at both the Natural History Museum in London and the Smithsonian National Museum of Natural History.

The Gemological Institute of America has said that this 2.69 X 2.06cm 59.6-carat diamond is the largest “internally flawless fancy vivid pink” diamond it’s ever graded.

This diamond is more than double the size of the previous record holder for the most expensive pink diamond in the world, the 24.8-carat Graff Pink that sold for $46.2 million in 2010. This auction also smashed the previous record for the most expensive diamond ever sold, the 14.6-carat Oppenheimer Blue stone that hammered for $57.5million last year. The Pink Star is now also the highest priced item ever sold at auction in Asia.