The short but eviscerating email, written by the owner of a prominent art gallery in Dubai telling him: “We will never feature your work,” left the 14-year-old boy devastated.

Born in Mankhool, Dubai, to a South Asian mother and Emirati father, the artist now known as Beloved Boy Chokra was no stranger to being ostracised. His bi-racial, bi-religious identity often found him on the fringes of both communities. That combined with his unusual artistic leanings as a visual and performance artist resulted in him being bullied and misunderstood by his peers.

Chokra, who prefers not to reveal his birth name or age, knew a drastic change was in order. With the help of his parents, he applied to art school in New York and prepared for a new beginning.

He felt his life was in danger, adding: “I was beaten up nearly every day. No one understood my practice.”

New York provided a young Chokra with a freedom of expression and a kindred artistic community that was not available to him in Dubai.

“I went to liberate myself. It was amazing. I lived in a tiny bedroom with a shared bathroom. There were rats there. It was disgusting but I had the time of my life. I’d sneak out in the middle of the night and go to Kate Moss’ parties. I learned to vogue,” he recalls.

He was also able to develop his craft.

“We would organise shows independently, people I still collaborate with. We did it guerrilla style — trespassing and shooting videos, even using flares and pyrotechnic explosions. It was all about taking risks artistically,” says Chokra, whose boyish demeanour belies a thoughtful intelligence. 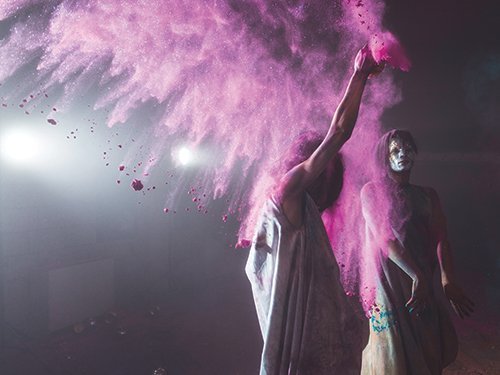 In New York, his career gained traction. He performed at the New Museum, Art Basel Miami and completed a residency at Robert Wilson’s Watermill Center. He was also featured in Vogue Italia and Domus, the design and architecture magazine.

When Chokra was invited to perform at the Sikka art fair in Dubai in 2012, it represented a kind of homecoming. Chokra’s performances often explore themes of nationality, origin and cultural identity.

What boy who grows up in Mankhool gets to perform at the MoMA? I would never have imagined this

In a flamboyant show called The Trucial Case, he took to the stage in an explosion of hot pink pigment, six-inch platform heels and a modified kandoura to explore themes of representation, the history of the Emirates and the notion of what it means to be Emirati but the controversial performance was pulled from the fair.

That turned out to be serendipitous as it sparked the attention of Klaus Biesenbach, the director of the Museum of Modern Art in New York. Ten days after his Sikka show, Chokra performed the piece at the MoMA. From there, his career took off.

Chokra says: “That’s when you realise you don’t belong to a place, you belong to your work.”

Next year will be a whirlwind one for Chokra, who has appearances scheduled at the Palais de Tokyo and the Centre Pompidou in Paris. He is also due to release a single in the summer on Jay-Z’s label Roc Nation. 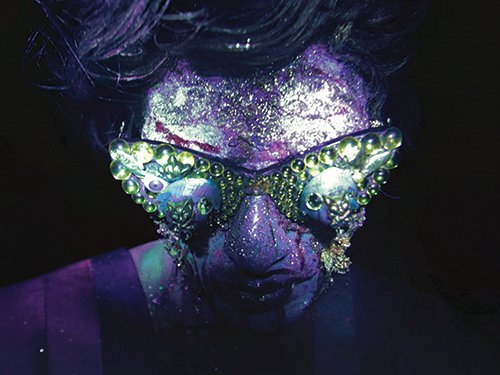 Recently the same gallery owner who spurned Chokra approached him and asked if he would perform in her gallery. After he reminded her of their first correspondence, she was left open-mouthed.

“I thanked her for it, really truly from the bottom of my heart,” says Chokra.

“If [she] had not written me [that email], I would have never gone to New York. What boy who grows up in Mankhool gets to perform at the MoMA? I would never have imagined this.”