GC gets behind the wheel of the Rolls-Royce Dawn – the new convertible that is arguably the luxury automaker’s most important launch in the last decade.

To get behind the wheel of a Rolls-Royce is always a sense of occasion – to do so in the brand’s only third convertible in over half a century even more so. In a mark of ultra exclusivity, the Goodwood marque releases just one new model annually – that includes variants like coupés and long-wheel base of the existing cars in its portfolio. So when the all-new Dawn launched earlier this year – joining the brand’s current line-up of the Wraith, Ghost and Phantom – expectedly, the car world spiraled into a state of feverish excitement.

Just months after its global launch earlier this year, we landed our very own Dawn in Dubai. This car is for the one per cent of the one per cent – a fact that isn’t lost on us as we pull open the coached doors that are hinged at the back instead of the front and sink into bright orange leather seats with veneered fine-grained rosewood and polished-to-a-fault chrome that is generously proportioned across the cabin. We start our test drive with the top pulled over. Crank the engine and you’ll hear the sound of nothing. The cabin is as silent as a crypt.

I need to tap the throttle twice just to check that the car is indeed switched on. Slipping the eight-speed automatic ride into go-mode, there’s a sense that you aren’t just driving a car – you’re commanding a land yacht that’s wide, long, beautiful and a real head-turner. The Dawn is built on the platform of the Wraith and uses a detuned Ghost engine – but the convertible feels far from a hatchet job of repurposing something that Rolls-Royce already owns. In fact, quite the contrary. It feels nothing quite like anything else from the British brand, and there’s a certain palpable sense of youth that comes through the handling of this vehicle – it’s clearly marketed to a much younger target group than previously. The average buyer of a Roller a few years ago was 55, today it’s 45. 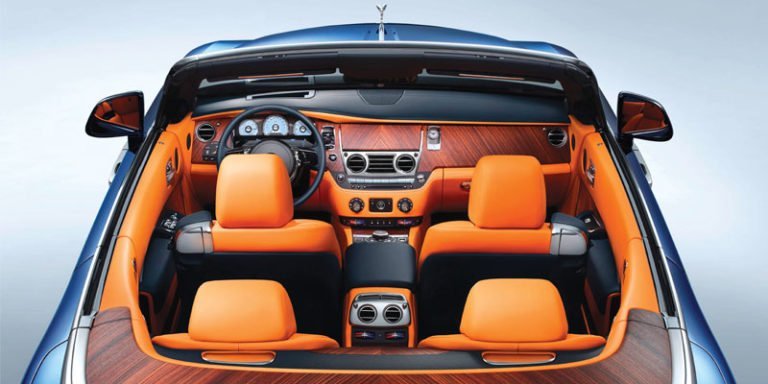 As we navigate down Sheikh Zayed Road in Dubai towards the Palm Jumeirah, I’m well aware that on light cruise mode it’s using only about 93 per cent of the 563 horses at its command. But burying the throttle into the soft carpet and hustling it is sorely out of character for something as regal as this ride – so I don’t. But know fully well that with a massive 6.6-litre twin-turbo V12, this one’s capable of clipping at full lick if the urge ever strikes. With air sprung suspension, I don’t feel the road one bit. With satellite aided transmission, the Dawn very cleverly uses GPS data to anticipate the road ahead and pre select the right gear so that by the time I hit an apex or long straight, the car knows exactly whether to downshift or upshift to lend a seamless drive that always draws the right kind of power.

As we park along the kerb in the Palm and peel away the soft roof that stows away neatly in 22 seconds, the interior is flooded with sunlight and the details starting from the stitch along with orange Mandarin leather begins to pop. Then there’s that pinstripe that matches the seats and runs along its side – in true fastidious RR style, it’s hand-applied using a squirrel-hair brush. I can begin to count the 16 speakers that make up the high-fidelity sound system that envelopes the cabin. A microphone picks up the ambient noise and automatically adjusts the individual volumes of each speaker so that roof up or down – you’ll never miss a faint James Bay riff.

This $350,000 convertible has struck upon an idea that wealth and ne taste need not be incongruous (as is sadly often the case among the newly minted). For the millennial who has hit the big time, he’s going to be rolling around in the same brand his granddaddy rode – just a new model that’s positively 21st century.