Out where Dubai’s urban sprawl turns into barren wasteland sits an unassuming warehouse. Hidden among rows of nondescript, corrugated industrial buildings, not so much as a sign hangs outside to advertise the location of Parc Fermé and it is mission impossible to get in.

This is no blind oversight or marketing mishap but a smart security measure. Even Google maps gives a fake location a few kilometres down the road in Dubai Investment Park on the advice of police – and with good reason, because behind the modest doors of this vehicle storage facility sit rows of gleaming supercars worth tens of millions of dollars.

Stepping inside, it is a petrolhead’s fantasy theme park, enough to make even the most dedicated environmentalist turn green. Among the scores of elegantly contoured cars, metallic modernity blends with retro chic. A Porsche 356 Coupe, last produced in 1965, sits next to a modified KTM X-Bow, which to the untrained eye looks suspiciously like a Transformer. 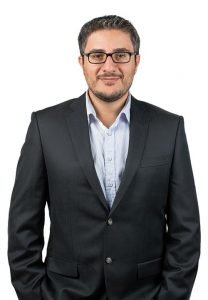 “This is my happy place,” smiles founder, owner and managing director Motaz Abu Hijleh, walking me through the garage. The UAE-raised Jordanian only opened the doors after watching me circle the building and confirming my identity by phone.

We are in the ‘platinum and premium’ room, where customers pay extra to have their prized possessions given an even more exclusive treatment. Cars here are parked further from their neighbours than customers on standard packages.

Whatever the price band, at the end of every month clients are sent a detailed report, which lists specifics such as the pressure of each tyre, how much petrol is in the tank and the last time the motor was started and washed.

It even includes pictures from three different vantages so customers can judge what kind of high calibre company their car is being kept in. It is this attention to detail that has earned Parc Fermé its reputation as a “spa for cars”.

One particularly angular contraption, which looks like it might take off at any moment, turns out to be the Lykan Hypersport, a 750-horsepower beast that can reach speeds of 394kph.

The $3.4 million UAE-born invention is the third most expensive car built to date, after the $4.6 million Lamborghini Veneno and the $8 million Maybach Exelero concept.

Abu Hijleh bends down to point out the 420 diamonds in the headlights. Next he shows off two McLaren P1s, which sell for about $1.3 million. With storage space for a total of 75 vehicles, it doesn’t take a genius to work out there is a lot of money behind these four walls.

That makes the need for the company’s advertising slogan – “professional, discreet and totally secure” – abundantly clear. Abu Hijleh clearly understands the importance of discretion as much as technical knowledge and ironclad security.  “We do more than look after the cars,” he says.  “We have very personal relationships with our customers.”

That involves going above and beyond the call of duty. He recalls getting a car on the same flight as its owner with 24 hours’ notice and having it parked outside the airport by the time the client emerged from customs.

Kevin Hackett, a British customer who keeps his vintage Triumph TR6 at the garage, says: “That is what brings people in. They get discretion here.

“There are a lot of important people from abroad who travel to Dubai to relax and they might not want anyone at home to know about [their cars] so they leave the toys here. Trust is the basis of everything.” 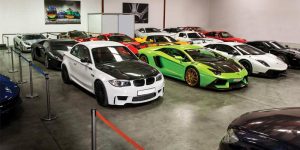 A former aeronautical engineer and motorsports team director, Abu Hijleh founded his firm in 2012 after spotting a niche business opportunity. He chose the name Parc Fermé – meaning “closed park” in French – to imply safe keeping for racing cars where they could be free from tampering.

The business also does a steady trade with car manufacturers in need of a secure spot to store secret models before high profile regional launches. Along with Frankfurt, Geneva and Tokyo, the UAE is one of the core markets used to make grand unveils.

Rates are agreed on a per-car base but the standard service starts at around $550 a month. Almost all clients have more than one vehicle in storage, which comes as little surprise: Parc Fermé’s core clients are the kind of people who can afford more than one seven-figure supercar.