It’ll ruin the experience of any other 4X4 for you

Top Gear has got itself into an unruly mess following the departure of chief host Jeremy Clarkson two years ago, followed by Chris Evans last year. But to its credit, it does know how to custom build rides.

Take this Mitsubishi truck, for example, which is a recently-unveiled one-off vehicle it designed and engineered in collaboration with Ralph Hosier of RH Engineering. It’s built on the standard L200 vehicle, and is designed to intimidate rather than please.

To make this an ultimate dune-bashing machine, it’s kitted with massive wheels with self-inflating tyres. The LED lamps are long-range and the suspension heavily modified in this 4×4.

Knowing that the aggression levels on this are dialed up to the maximum, it isn’t difficult to imagine an over enthusiastic driver turning this thing on its roof. Good thing then that it comes with a roll-cage to protects its occupants, and Cobra racing seats to allow them to sit snug inside. 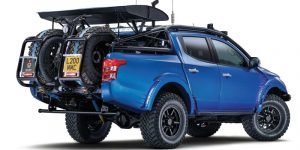 In a case of real-life imitating fantasy, Mitsubishi took note of the build. They’ve said that they used this monster as the inspiration for a special-edition Barbarian SVP L200 pickup truck, limited to 250 units and which will be manufactured by the carmaker’s Special Vehicle Projects division.

With 17-inch wheels and a far calmer exterior, the SVP L200 by Mitsubishi isn’t as wild as the Desert Warrior. And going by the steroid-addled Desert Warrior that looks like it would prefer to drive over cars – rather than past them – that’s a good thing.