The BMW i8 is here

Dubbed the future of the supercar, the i8 is bursting with technology and balances environmental concerns

One has only to look at the latest Formula One cars to see the future of high performance motoring seems to lie in optimised smaller capacity combustion engines paired with auxiliary electric motors. The technology has already filtered down to road car design, notably in the form of the LaFerrari and McLaren P1 hybrid supercars, both of which cost seven-figure sums.

But the (marginally) less well-heeled who want to experience the thrills of a thoroughbred hybrid sports car shouldn’t despair because BMW’s much-anticipated i8 has finally arrived – and after driving it from the traffic-clogged streets of Los Angeles to the testing twists of some of California’s most challenging canyon roads, I can tell you it has been well worth the wait.

BMW is calling it “the future of the supercar” and it probably is. Looking for all the world like it belongs on a life-sized Hot Wheels track, the i8 combines an ultra-rigid, carbon fibre passenger cell with lightweight, aluminium underpinnings to provide 50-50 weight distribution that really does offer the sort of on-rails handling that will have you seeking out the back roads. 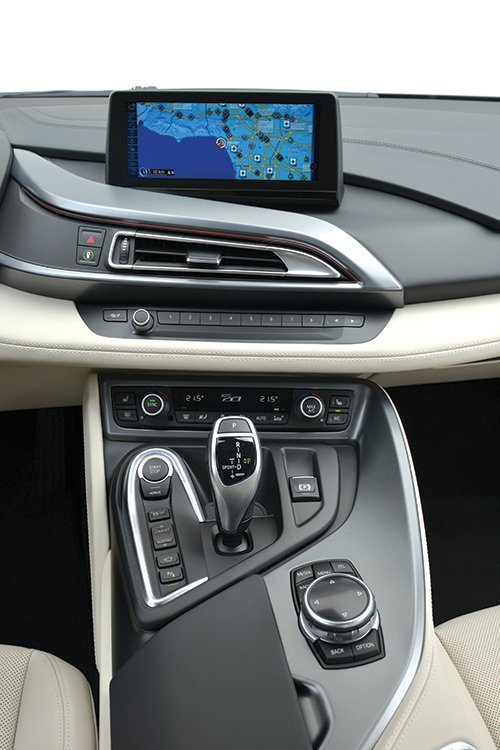 Situated behind the surprisingly spacious two-plus-two cabin is a neat, three-cylinder, 1500cc, 231 horsepower, turbocharged petrol engine which drives the rear wheels while, hanging down low beneath the space which would ordinarily be called the bonnet, is a small but potent electric motor which drives the front ones.

Used in purely electric eDrive mode, the i8 makes for a nippy cross-town commuter that can travel up to 22 miles on a single charge and touch 75mph.

After that, there are comfort, eco pro and sport modes which offer varying combinations of petrol and electric power to provide anything from ultra-economical long range cruising to adrenaline-inducing high speed driving.

BMW claims the i8 will return the equivalent of 135 miles per gallon, which is decidedly impressive for a car with a restricted top speed of 155mph. At least, it would be impressive, were it not for the fact the best fuel economy I could manage was a far-from-frugal 40 miles per gallon, while the figure was actually well below 30mpg for the majority of my 150-mile drive.

The problem lies with the fact that the official numbers are produced under controlled conditions, not in real world driving. I don’t doubt it would be possible to achieve the claimed 135mpg figure but to do so it would be necessary to make a lot of short, in-town journeys in all-electric mode, charging the batteries in between. Because once you’ve used up your 22-mile electric range, you’re back to running on good old-fashioned petrol.

So if you’re expecting to be able to enjoy sustained supercar performance for less than the price of running a Fiat 500, think again. If, however, you decide to buy an i8 on the basis that it is both the most advanced car of its type currently available and that it offers a superb driving experience, then you won’t be disappointed.

Its sheer versatility in being able to transform from an emissions-free, all electric (short range) commuter car to a pure driving machine with nothing more than the flick of a switch is truly impressive. And in full-on petrol mode, it really sounds the part – although its sporty growl is actually down to the fact that its exhaust note is synthesiser-enhanced.

But perhaps the most exciting thing about the i8 is the fact that it offers a massive leap towards the future in terms of hybrid sports car technology. As such, it deserves to go down in history as an automotive landmark. 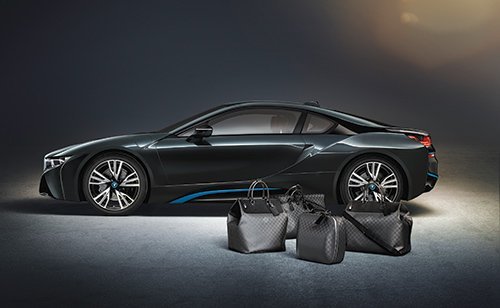 In keeping with the i8’s futuristic look, high-tech petrol-electric power train and carbon fibre bodywork, the luggage too is made from the now ubiquitous material that was once reserved for Formula One cars and space rockets.

Produced by Louis Vuitton, the i8’s luggage set comprises two weekend bags, a suit bag and a business case, all of which are designed to sit, fit and stack perfectly inside the car’s load area. And, with carbon fibre weighing just 600gm per square metre, it’s only the weight of what you fill them up with that’s likely to slow you down.