Driving a vintage Ferrari in London

GC gets behind the wheel of a rare 30-year-old Ferrari 288 GTO – once the fastest supercar in the world.

In the 1980s, Group B rally cars were motorsports rock stars, spitting fire and horsepower around the world. It was the era of homologation specials – ludicrously powerful road cars built by manufacturers to satisfy rulings that competition vehicles must have some foot in reality.

Ferrari wanted a piece of the madness and when a Group B circuit racing series was announced, it built a road car on which a motorsport icon could be created. The 308 GTB was beefed up, given a twin-turbocharged V8 engine and renamed the 288 GTO. But only Porsche and Ferrari signed up and the lack of manufacturer interest led to the circuit series being canned. The racing 288 GTO never came to fruition but 272 road cars were completed for public consumption.  Today they stand with the brand’s icons. 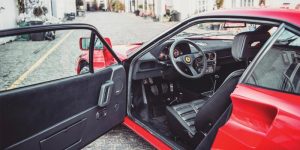 This particular 1985 car was offered up on sale by London dealer HR Owen with a guide price of $3.5 million. Good examples tend to sell quickly and for big money. Originally sold in Milan, it was restored inside and out in Ferrari’s hometown of Maranello and authenticated by Ferrari’s Classiche division as being of original specification.

Driving a 30-year-old car for the first time in central London is daunting at the best of times. When it is an exotic Italian supercar worth several million dollars, it is terrifying. I squeeze into the left-hand seat and thank my stars I’m not taller – at 6ft, my head is wedged into the newly refurbished headlining. The pedals are offset to the right, which requires some hip-shimmying to settle into a comfortable position. The 288 sports a dog-leg gearbox, which means first is down and left. It engages with a classic rifle bolt click of stick on metal gate and I meekly indicate, hoping the traffic will let me out. 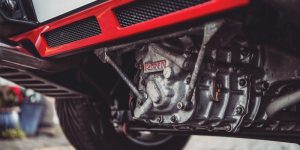 Luckily, a black cab waves me on. I promptly stall the car, having erroneously expected a very stiff clutch. A prod of the starter button fires up the 2.9-litre V8 behind me once again and we’re away. The cabbie’s generosity proves an omen for the reaction one gets driving a 288 GTO in London – universally appreciative. Unlike a poster car such as the F40 or Enzo, the 288 GTO is relatively understated. But those that know what they are looking at hang back in traffic. Out come the camera phones and admiring comments filter through the open window.

I’m still terrified of dinking the flawless paintwork but as we find traffic-free sections of road I pluck up the courage to open the throttle. The surprising sedateness of the car’s lower revs disappears when the twin turbos whoosh, sending 400 horsepower to the chunky rear tyres. The exhausts sound a fanfare and the acceleration pushes me back into the new black leather. The power might seem mediocre by modern standards but the GTO weighs just 1,160kg and from 1984 to 1987 was the fastest supercar in the world. 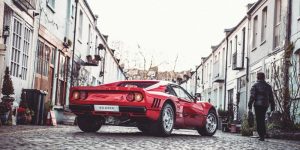 It was, and still is, a very rapid machine. Unlike modern cars, the 288 has beefy, heavy steering and textured feedback pours into the cabin through the wheel, the seats and the air whistling around my ears. It is a tactile, exhilarating experience but not as daunting and difficult as expected. At slow speeds, it is well behaved and comfortable, save for the shoulder strength needed to heft the wheel around.  All too quickly, I am instructed to take the GTO back to the showroom – thankfully, in exactly the shape in which I found it. Despite the limited time with the car, I leave with a big smile on my face. To drive a machine like this is a privilege few will experience, unless they have a few million dollars to spare.