Emirati Ahmed Al Ameri may have imported his craft from Japan, but he’s perfected it right here and is the founder and lead driver of the Toyota Emirates Drifting Team.

Ahmed Al Ameri, the 32-year old Al Ain native, isn’t your typical race-car driver. Granted, like his contemporaries he has a perennial obsession with cars, but it was whilst studying for a Bachelor’s degree in Japan that the now father-of-three first got the taste for competition. “In 2005, while getting my BA in Japanese economy and business management, I got the best foreign Japanese speaker award,” the gregarious Al Ameri rather incongruously said as an opening gambit. We were talking at a Dubai road-safety event, a cause he is constantly promoting. A wide grin permanently adorning his face, Al Ameri, contrary to his media-trained Formula One counterparts, couldn’t be more accommodating. “It was because I could speak the language that I feel I was accepted more there and learnt more about the culture and racing,” says Al Ameri.

Al Ameri was quickly immersed in the famed indigenous high-speed car scene in Tokyo, where he started out by participating in drag racing events.  “In 2005 I got fifth overall in Japan for the drag racing championships.” Though, eventually the cost of forever coaxing increased horsepower from his car’s engine, essential to stay on top in the drag racing world, forced Al Ameri to look elsewhere for his kicks. The answer came to him in the most unlikely of places. “The racers like to do social things together. We were always going to sing karaoke. I don’t sing well, but they had to listen to me.

“One of my friends asked why I’d never been to the drifting meets. So, we went to the mountain roads soon  after. It’s not the proper place to do this,  but this is the Japanese culture. I went there and I tried to drive the car. That was the best feeling.” Coming to prominence in the late 80s, drifting involves oversteering or essentially controlled skidding round the corners of set courses to the extent that the front wheels are often pointing in the opposite direction to the turn. It’s the kind of universe immortalized in cult Japanese film, The Fast and the Furious: Tokyo Drift. “I quickly bought a car, changed the set-up and within 15 minutes of racing, I crashed it. Then I went back home without a car for six months. That’s life.” 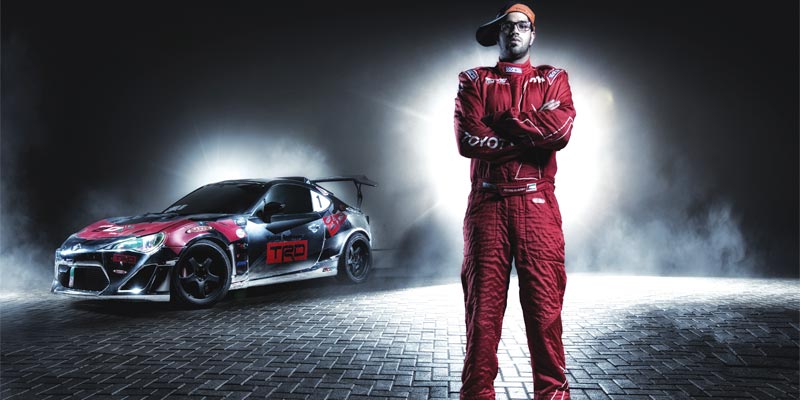 Yet that initial exhilaration never left him. Al Ameri returned to the UAE in 2010 where the sport was still in its nascent stages despite the Dubai Autodrome having hosted a number of international driving series since 2004, including the European FIA GT Championship. However it was the opening of Abu Dhabi’s German-designed Yas Marina Circuit in 2009, bringing the lucrative and glamorous world of Formula One from the streets of Monte Carlo and Montreal to the country for the first time, that propelled the UAE’s motorsport scene to the international level.

“I told myself that I’m going to build a street fighter drifting car just for fun on the weekend. I had no idea there would be a drifting family here.” Then at the end of 2010, a radio announcement about a Formula D exhibition taking place at Yas Marina changed everything. “I called them and told them who I was, that I drifted. They obviously had never heard of me. I begged them to let me compete because I was too late to enter. I auditioned for them. They put a layout for me. I did the course and they clapped. From that day I have been part of the group. We were just seven then. Now we are more than 60,” says Al Ameri.

In 2011, Al Ameri was the founding member, and now the lead driver, of the Toyota Emirates Drifting Team – a wholly Emirati operation regularly competing in the Drift UAE series and other regional and global events. The fact everyone in the company hails from the emirates is an obvious source of pride. “We are all from this country – from the manager to the engineers, to the logistics people. This is a new generation of young Emirati guys, competing with the best from around the world and winning. It’s something really special.”

Earlier this year in January, Al Ameri added to his stack of trophies by winning first place at the international Federal Tyres King of Nations World Championship UAE leg that came to the Middle East for the very first time.

Despite it no-longer being his full- time occupation – Al Ameri is a consultant to the General Manager of Al Ain Municipality since his family grew to three children – his final anecdote revealed the extent of his passion for the sport and that there are no thoughts of retirement on the horizon. “During the championship in 2015 we had the second round in Oman. I was talking to my wife just before she was about to have our third child. She said to me, ‘I have a feeling you are going to go to Oman and I will have the baby.’ I told her I wouldn’t go. It was a tough decision, because of course she is more important. Before we went to sleep, she said, ‘I will let you go, but you have to promise me you will come back with something…the first place.’ I told her it was a deal. I was just about to start qualification when I got a call from my mother. She said, ‘Congrats son, you have a third daughter.’ I had to win. And I did. The next day I came back with the trophy and dedicated it to my daughter. My mother always tells me I won’t give up and I feel that way too.”