GC test-drives the new Vanquish Volante in the Golden State

Teal Blue, Arizona Bronze, Madagascar Orange – they might not do much to lift the spirits on a foggy day in my home city of London, but the paint options available for Aston Martin’s fastest-ever convertible, the Vanquish Volante, sure did look the part when seen shimmering beneath the Palm Springs sun where the car was launched.

The one I drove – with none other than the son of the late racing driver James Hunt in the passenger seat – was appletree green and was finished with cream leather and matching stitching. It looked as bright and inviting as a David Hockney swimming pool picture and screamed ‘California dreamin’ louder than Mama Cass at full volume.

Indeed, it’s not too far-fetched to suggest that the Vanquish Volante might have been created with the Golden State in mind – or, for that matter, the equally sun-drenched climes of Dubai.  A carbon-skinned beauty moulded, according to Aston design chief Marek Reichman, to evoke the look of a ‘scarf blowing in the breeze,’ it’s a supremely comfortable long-distance GT with the six-litre, V12 heart of a refined drag racer.

The available 565 horsepower is sufficient to catapult the less than slimline Volante from standstill to 60 in just 4.3 seconds – barely slower than it’s hard top sibling – with top speed being quoted as 183mph. 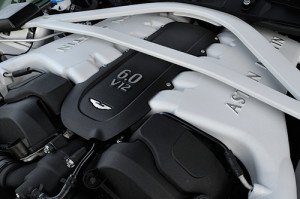 More importantly, though, this is a car that proved as happy to purr down Palm Canyon Drive between the shops, galleries and restaurants (and beneath the billowing skirts of the town’s 26-foot sculpture of Marilyn Monroe) as it was to growl along the arrow-straight, gently undulating desert roads or roar between the rattle-snake twisty switchbacks of the driver’s delight that is California State Route 74.

Admittedly, it should be pretty good since it’s currently the most expensive car in Aston’s ‘standard’ line-up – but, for your money, you do get something exceptional. Even those who don’t consider themselves to be ‘car types’ will not only be wowed by the Vantage Volante’s appearance, but by the sheer quality of the way everything is made, from the aluminium underpinnings (a sculptural work of art that’s worth crawling on the ground to look at) to the hand-stitched interior and the beautifully snug-fitting roof that electrically retracts in just 14 seconds.

And it’s not a selfish sports car, either, with comfortable room in the back for a pair of pre-teen children – or even, perhaps, one-and-a-half average-sized grown-ups who don’t want to go too far.

So, if you have $325,285 to spare and love the idea of driving a car that goes as well as it looks, we recommend you get to work on Aston’s on-line Vanquish Volante configurator as soon as possible – and don’t hold back on the colour scheme.