The 2017 Continental Supersports can go from naught to 60mph in just 3.7 seconds.

Typically, we’d expect slick, low-slung, swept-back supercars of European mainland descent to go chasing “the fastest” or “the most powerful” records. But blue blood carmaker Bentley, better known for its proper British design sensibilities backed by solid German engineering, has shown that it too can throw its hat into the ring by building the fastest production SUV in the world two years ago and now this: its most powerful production car ever, that also happens to be the world’s fastest four-seat car in production.

This is where Bentley’s shifting the goalpost, because it’s mashing practicality and desire in a single package. Two-door sportscars are fantastic bachelor rides, but when it’s time to settle down you’re going to have to trade it in for a take-your-family along car. Cue Bentley who are making a statement that the trade-in need not be a comprise. 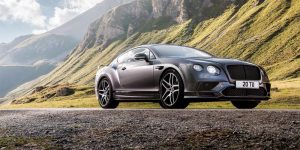 The $293,000 car can reach a top speed of 209mph and is Bentley’s most powerful production car ever built.

The Bentley Continental Supersports has been around for a while, but in the new 2017 guise, it packs in a whole lot more punch compared to the outgoing model. The new model has a 6-litre W12 that’s capable of producing 700hp and 750lb-ft of torque –that’s 79hp more and 160lb-ft more than the one it replaces.

It’s capable of going from 0-60mph in a blink-and-you’ll miss it 3.7 seconds. More importantly, the robust engine doesn’t let up and takes the car to a top speed of 209mph. What makes these figures even more impressive is that Bentley hasn’t skimped on the luxurious trimmings in order to reduce the car’s weight. It’s still weighs nearly three tonnes and every bit of its interiors from the type of veneer to the colour of the stich can be customized to your fancy once you put in a request to the Mulliner factory.

The exteriors of the $293,000 car still has a stately design about it, although the carbon fibre slitter upfront and diffuser at the rear and those bright carbon ceramic breaks peeking out from within the 21-inch alloys clearly signal that the business of this car is indeed speed. Make sure the kids are buckled in tight.