The radical concept was recently unveiled in Abu Dhabi. This is the machine where F1 technology meets road-legal cars.

Red Bull Racing F1 team’s Chief Technical Officer Adrian Newey has collaborated with Aston Martin on what will likely be one of the most powerful hypercars we’ve seen this decade. With a power-to-weight ratio similar to that of a Le Mans’ race car, this beast machine is angling for a targeted weight of under 1,000kgs and a V12 engine that is capable of punching out 1,000hp of power – maybe more. Newey’s know-how of F1 technology means that this car is theoretically as of now as fast as an F1 car.

The car is expected to begin deliveries by 2018-2019 and cost around $3million. Apart from Newey, the project also has the active involvement of Aston Martin’s Chief Creative Officer Mark Reichman and AM’s special vehicle operation’s chief Dave King who gave us the jaw-slacking Vulcan hypercar. With an A-list team of engineers and designers working on the AM-RB 001, it’s bound to make the La Ferrari, Porsche 918 and McLaren P1 pale in comparison. 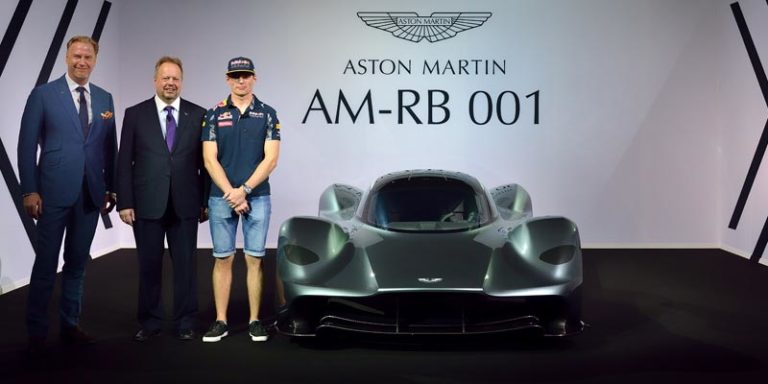 “It’s the car that will define this decade. For many reasons AM-RB 001 breaks so many boundaries, so many rules. It’s as fast as a race-trimmed Formula One car around Silverstone, but you can drive it around the road. It’s capable of 4g lateral forces. The way it manages the airflow across the body is quite revolutionary too. It’s redefined for me the rules that I had over 37 years of designing motorcars in my career,” said Andy Palmer, CEO and President of Aston Martin in an exclusive interview to Global Citizen on the sidelines of the unveiling in Abu Dhabi earlier this week. Joining Palmer at the Middle East unveiling was Red Bull Racing’s F1 driver, Max Verstappen, who has had a phenomenal season this year not only winning the 2016 Belgian GP, but also fininshing on the podium on seven occasions in 2016. Max Verstappen and his teammate Daniil Kvyat may also be signed on to test the AM-RB 001 car when it goes into the production phase before deliveries begin.

Only 150 road-legal versions of this hypercars will be produced – and they’re all sold out already. In addition, Aston Martin will manufacture 25 more that will be track-only cars. Strap a pair of wings to it, and watch it lift off.