The Middle East’s most controversial artists, brothers Ramin and Rokni Haerizadeh, are making an impression on the contemporary art scene.

While Dubai’s art scene is steadily growing with the emergence of local, regional and international galleries laying roots in the emirate, the metropolis also plays home to two controversial artists who were forced to flee their homes in Tehran. Brothers Ramin and Rokni Haerizadeh are currently taking refuge in the urban (and flourishing) art area, Al Quoz, after being threatened with imprisonment in their native Iran in 2009. Ramin’s partially naked self-portraits from his “Men of Allah” series had Iran’s Ministry of Intelligence and National Security knocking while the pair were in Paris and the two were advised to seek refuge somewhere else. Dubai became their savior and has been their home ever since.

“It’s a safe city, and we have a great space to live and work,” the brothers collectively answer. “We can build something here in the U.A.E. and we want to stay here as long as we are allowed.”

Seemingly inseparable (choosing to be depicted as one in our interview) living and working together in the same non-descript modest warehouse, Ramin and Rokni are two very different artists by style. Ramin (the bearded one), 37, produces work characterised by photographs layered over controversial pictures of himself and religious and political imagery. While Rokni, by contrast, is a painter influenced by European greats such as Francis Bacon and Pablo Picasso. 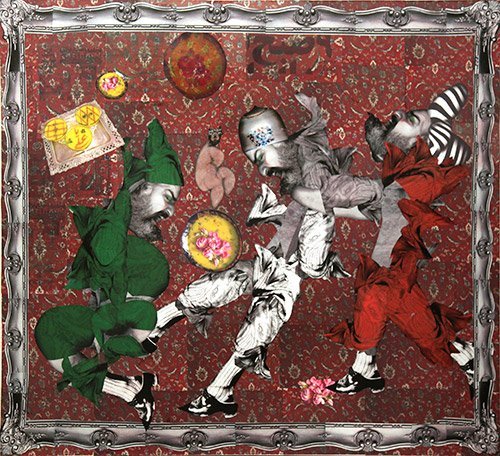 And it’s 34-year-old Rokni who exhibited at Art Basel with Gallery Isabelle van den Eynde this past the summer, the first U.A.E-based artist to present at the fair. Rokni, who has work included in public and private collections all over the world including the Tate Modern, the British Museum and the Rubell Family Collection, presented his series “Fictionville, Life is Perhaps That Enclosed Moment when My Vision Destroys Itself in the Pupil of Your Eyes” and “Just What is it That Makes Today’s Homes so Different, so Appealing?” a project on paper and with video animation. The work incorporates media images of the demonstrations in Iran in June 2009 (when the brothers fled) and raises questions about the culture of popular protest by illustrating the police and protesters as animals. “Controversy belongs to the audience, not the artist,” the brothers simple reply when asked about the common controversial thread in their work which is undoubtedly producing some of the most provocative art to currently come from the Middle East. “We never tone it down; we just remove it from sight. If you censor yourself, after a while you get tame. You need to be brave as an artist. [The political situation in Iran] is influencing our lives. The reason we’re here is directly related, naturally it is continuously shaping our existence.” 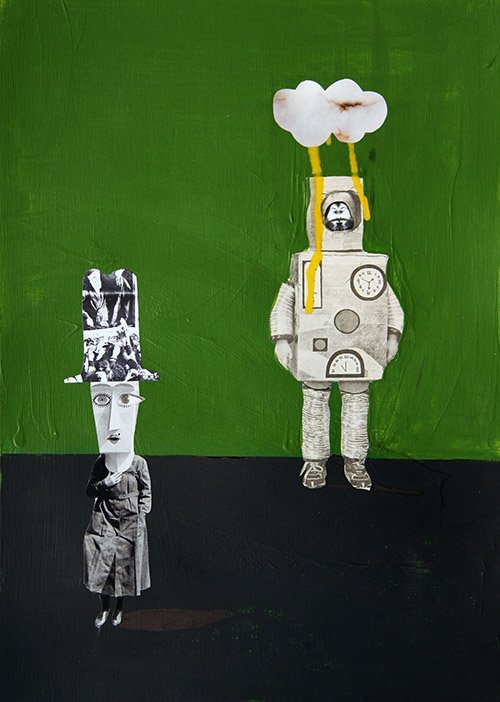 But while the two artists continue to criticise the Iranian regime, another common thread is their sense of humour (Ramin describes Rokni as a “Philippino make-up seller with a fox tail” while Rokni describes Ramin as a “bearded snail”). From Rokni’s exaggerated depictions of flawed dignity to Ramin’s mullah’s dressed in drag, the pair refuse to see themselves as political anarchists or religious rebels. “We would never put these titles on ourselves. As soon as you do, you cripple yourself,” they explain. So what’s next for the duo? “We’re going to build Noah’s Ark.”