A new book documents the restoration of Jeddah’s public artworks, created by the grand masters of sculpture.

In the 1970s, Jeddah’s then mayor, Mohammed Said Farsi, envisioned a city on par with other global cultural hubs and undertook the Jeddah Beautification Project. With an initial budget of $150 million from his personal funds and private donations and the help of the Spanish architect Julio Lafuente, Farsi started acquiring and collecting select sculptures to enhance Jeddah’s urban spaces. The priceless collection now amounts to more than 400 works that sit along Jeddah’s corniche. In addition to some local and regional artists, the collection includes works by masters such as Henry Moore, Alexander Calder, Jean Arp and Joan Miro.

Over the years, however, Saudi’s harsh climate, heat, salty sea air and sand have taken their toll on the pieces. That is when the Jeddah-born art patron and collector Fady Jameel stepped in to initiate the project to restore the works in 2012. The Jameels are key figures within the Middle Eastern arts community. Abdul Latif Jameel Community Initiatives sponsors Edge of Arabia, which promotes contemporary art from the kingdom and showcases it around the world. 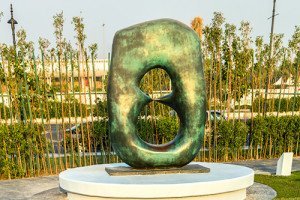 The Jameel family are also patrons of the eponymous Islamic Art gallery in London’s Victoria and Albert Museum and sponsor the institution’s annual Jameel Art Prize. The renovation project was spearheaded by the British firm Plowden and Smith, which specialises in the restoration of fine and decorative arts.

In conjunction with Jeddah Art Week in early February, the public artworks and their restoration process have been documented in the new book, Sculptures of Jeddah: The Restoration of a Rare Collection of Twentieth-Century Art. The book contains a foreword by Chris Dercon, director of the Tate Modern, photography by the acclaimed Saudi Arabian artist Ahmed Mater and unseen architectural archive material and personal sketches by Lafuente.