Forget panic rooms or the five supercars parked outside the front door. There is only one thing the super-rich need – their own private museum.

It has become the ultimate status symbol of the super-rich. Less ostentatious than a yacht or a penthouse, more classy than jewels or designer watches, the private art museum has become the must-have for the global elite. Over the past decade, as a new breed of ultra high net worth individuals has arisen in the growth and emerging markets of Asia, the Middle East and Latin America, the number of these institutions has grown exponentially, transforming the global art market.

The Broad museum, scheduled to open in Los Angeles in September, is an 11,000 square metre space that will showcase the collection of the billionaire Eli Broad, who is worth $7.2 billion. Indonesian billionaire Budi Tek, rated one of the world’s top 10 art collectors by Art & Auction magazine, has branches of his Yuz museum in Jakarta and Shanghai with a third set to open in Bali near the capital Denpasar in 2017. Last year husband and wife Chinese super-collectors, billionaire Liu Yiqian and Wang Wei, opened the second Long Museum, now the largest private museum in China with 16,000 square metres of exhibition space.

Such is the significance of these institutions that a new Global Private Art Museum Association (GPAMA) launches on May 20 at the Art15 fair in London, bringing together museums from as far afield as China, Italy, Indonesia, Turkey and Dubai. But what is driving their proliferation?

Firstly, it is the growing wealth of the BRIC countries and other emerging economies, particularly in Asia, where there were a record 444 billionaires in 2014, according to Forbes. The most exceptional growth has been in China, which had no billionaires 20 years ago but now has 152. Beneath this top tier of wealth, there is also a growing, highly affluent middle class with the money to seriously collect art. The Chinese Luxury Consumer White Paper 2012 found there were 2.7 million high net worth individuals with personal assets of more than six million yuan ($960,000) and 63,500 worth more than 100 million ($16 million).

The second factor is the art market’s strenuous courting of this new money, with new art fairs opening and extensive VIP programmes to cater to new collectors. Georgina Adam, editor at large for the Art Newspaper, says: “The art fairs are keen to bring in new money. They’ve got the yacht, the Rolex and now they’re seeing that to be taken seriously, they also have to have art. You will have a VIP person for China, for southeast Asia, and their job is to get people together at dinner and cocktail parties. They invite and probably pay – it’s never been clear – for them to come. Then they get sucked into the lifestyle. They get invited all over the place – to Venice and other biennales – and it gets to a point where they decide to have a museum. It’s become the billionaire’s must-have.”

Wendy Cromwell, president of the US Association of Professional Art Advisors, says the proliferation of private museums has in turn contributed to the growth of art fairs. In the past decade the number of fairs worldwide has risen from 68 to more than 200. The biggest fair, Art Basel, launched Art Unlimited, a 12,000sq m exhibition hall, in 2000 to showcase massive works of art, from 22-metre paintings to installations and sculptures the size of an apartment, to cater for private museums. It is now a global brand with three editions, the original in its Swiss home city and fairs in Miami and Hong Kong, which court the new class of mega-wealthy collectors from Asia and Latin America.

Cromwell says the Rubell Family Collection in the US, which includes works by Damien Hirst, Jeff Koons and Andy Warhol, was instrumental to the establishment of Art Basel in Miami Beach, while the Zona Maco fair in Mexico City launched a year after Eugenio Lopez’s Jumex Collection, said to be the largest private art collection in Latin America, opened in the suburb of Ecatepec. She adds: “It is a pattern that is quite self evident. Where private museums open, fairs do come.”

This symbiotic relationship is evident in the UAE where Art Dubai enjoys a close relationship with local private collections, including Sultan al Qassemi’s Barjeel Art Foundation in Sharjah, which specialises in Arab art, and the Iranian collector Ramin Salsali’s eponymous museum in Dubai, both of which are part of the press and VIP programmes at Art Dubai. Al Qassemi, who is a director of this year’s Global Art Forum at this year’s fair, says: “I was able to visit galleries that came during the fair with other collectors and compare and speak to the artists. It allowed me to build a mental map of where I wanted to go.”

Salsali, a member of the GPAMA, says up to 10 further private museums are planned in the UAE. The Saudi Abdul Latif Jameel Community Initiatives, which operates the Jameel art prize shown at the fair, is also opening a new arts centre in the country in 2016 and another in Jeddah. 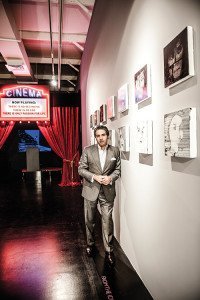 Fair director Antonia Carver says private museums have “a trickle-down effect” in terms of building a sustainable art scene by encouraging other collectors to be more adventurous and buy installation or video, and by commissioning and exhibiting lesser-known or emerging artists.

Philip Dodd, founder of GPAMA, agrees that in regions such as the Middle East or Asia private museums are more than status symbols: they make up for a lack of state funding for art. He says: “Across the globe, private museums of contemporary art are becoming more numerous and more important. In certain parts of the world they are more important than their public sector counterparts in sustaining and developing contemporary art.”