“We are all storytellers. Whether writing an article as a journalist or working with a gallery, we want to help tell a story,” says Myrna Ayad, the new fair director of Art Dubai. Ayad, a veteran journalist and the former editor of Canvas magazine, joins a growing group of former writers and editors who have become fair directors, including Marc Spiegler of Art Basel, Noah Horowitz of Art Basel in Miami Beach, and Benjamin Genocchio of the Armory Show.

Last year, she replaced Antonia Carver, who was named global director of Art Jameel, the Saudi arts and culture foundation, which partnered with London’s Victoria and Albert Museum to create the Jameel Gallery of Islamic Art. Carver will continue her relationship with Art Dubai by joining the fair’s advisory board.

Ayad has followed the growth of the fair from its very inception. “When I was approached for the position, I was no stranger to the fair. I’d been covering it since it was called the Gulf Art Fair in 2006.” Her journalism background makes her uniquely positioned for the role. “Knowledge base is a significant component of the job. I’ve been covering art as a journalist for 15 years and I’m pretty familiar with art practices in the region and who the players are,” she says. 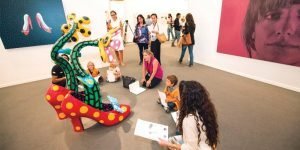 The fair has grown significantly over the last 11 years and has been fundamental in engaging Dubai with art and culture. A decade ago it brought in 40 galleries with 8,000 visitors compared to 2016’s 94 galleries with 27,000 visitors. It has inspired a weeklong programme of events, including Design Days Dubai, the Global Art Forum, SIKKA Art Fair, as well as Art Nights at Gate Village, Alserkal Avenue’s Programmes, and the Galleries Night, RCA Secret Dubai.

This year, Art Dubai endeavours to add to the discourse a conversation about modernism in the region. As a complement to the fair’s Modern hall, Art Dubai will introduce the inaugural Modern Symposium comprising a series of talks and presentations focused on the life, work, and cultural impact of 20th-century modern masters from the Middle East, South Asia and Africa.

The fair will also offer its largest performance art programme to date. The Room, Cooking Liberty is a visual and gastronomic experience presented by Beirut-based art collective Atfal Ahdath. Inspired by Salvador Dali’s cookbook, Les Diners de Gala, they will transform the space into a surrealist dining experience. “This will apply to everything from the ambiance and music to the food. I cannot wait for this,” says Ayad enthusiastically. “This is a platform for artists to explore and dare. It’s an installation and performance art — it’s entirely immersive.”

What distinguishes this fair from others globally is its diversity. There are 44 countries participating, with a particularly strong contingent of Iranian galleries as well as the highest-ever number of galleries from Latin America. “That diversity is unrivalled. When you go to European art fairs it’s mostly European art and when you go to American fairs, it’s mostly American art. With 44 countries represented, you can imagine how many nationalities are in those booths. You can witness the world’s cultural practices here.”