Legacy That is The Tip of the Iceberg

Imagine one of the richest men in the world is showing off his absolute pride and joy and he wants to share it with you: not just for a couple of hours, or even just for a day, but for as long as you like.

“Take your time, enjoy every moment,” says the tall, impeccably manicured multi-billionaire Bernard Arnault, as he welcomes guests to his newly favourite corner of the Bois de Boulogne, the historic park in the affluent western suburbs of Paris.

As chairman and chief executive officer of the luxury goods conglomerate LVMH, the 65-year-old can afford anything he wants. He is well known for his $35 million private paradise island in the Bahamas, his $41m superyacht, his magnificent portfolio of properties ranging from a St Tropez villa to a winter retreat in the Alps.

But today the sun is shining brightly during a remarkably warm October in the French capital and the smiling Arnault, dressed in a dark designer suit and tie with plain white shirt, is convinced his epic new acquisition tops the lot.  It’s his long-awaited Louis Vuitton Foundation for Creation (Fondation Louis Vuitton pour la création), more than $135m worth of sparkling magnificence celebrating almost everything that Arnault holds dear.

“It contains my ideal art collection, it’s a dream which has become reality and it has exceeded my expectations,” says Arnault, referring to a host of extraordinary pieces exhibited in 11 galleries. A passionate collector of paintings whose first auction purchase was a Claude Monet depiction of Charing Cross Bridge in central London, Arnault says the showpiece museum and cultural centre, in line with the work of the foundation, focuses “on the connection between contemporary artists and the second part of the last century”.

The Frank Gehry-designed museum is already a high-tech architectural base for some of the finest pieces in the world, including works by Jeff Koons and Richard Prince, and will attract millions of visitors every year. In this sense it will follow in the tradition of the iconic Louvre museum, which dates back hundreds of years and has become synonymous with Paris, and the similarly renowned Pompidou Centre, designed by Richard Rogers and Renzo Piano in the 1970s. 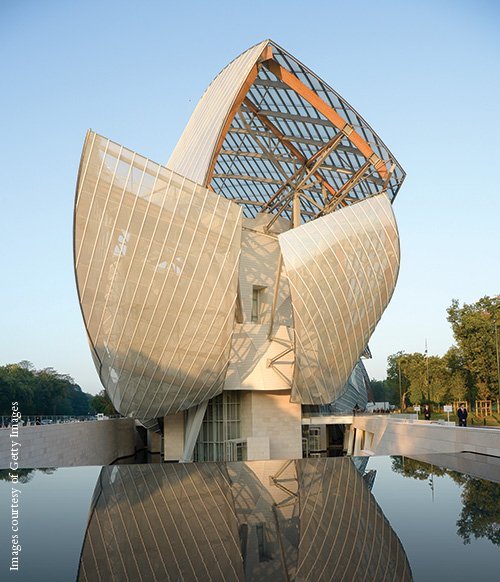 Referring to the 12 glass sails which form the new foundation’s 13,500-square-metre outer canopy, Arnault made it clear the design was always just as important to him as the contents.  Recalling his late father Jean Arnault, the founder of the family construction company Ferret-Savinel, Arnault says: “I have always been passionate about building. I come from a family of builders. My father was a builder in the north of France. When I finished my studies as an engineer I joined him and I have always loved working with architects.”

Gehry, the renowned Canadian-American architect, was chosen for the foundation’s design, first meeting Arnault to discuss it in the early 2000s. Arnault was initially inspired in 2001 by Jean-Paul Claverie, then a special advisor to LVMH, who said France needed a version of Gehry’s much praised Guggenheim Museum in Bilbao, northern Spain.

After being commissioned for the Paris project, Gehry came up with a design based on the Grand Palais des Champs-Elysées and other renowned glass structures. He set out to depict sails inflated by the wind enveloping an “iceberg” and surrounded by the kind of terraces created by French landscape gardeners.

“The original idea was to build a place in movement. It’s like a cloud – it changes,” says Gehry.

A coating of white fibre-reinforced concrete called Ductal first led Gehry to use the term “the icebergs”. Beyond the sails made up of 3,584 laminated glass panels, each unique and specifically curved to fit the shapes drawn by the architect, there is a waterfall that cascades down steps, creating natural light in a space which will be used for LVMH fashion shows.

Claverie, now the manager of LVMH’s philanthropic activities, said the foundation building is designed to “express the artistic, cultural and emotional values, as well as the art of living, promoted by Bernard Arnault and the LVMH group, but it is truly a charitable foundation, devoted to the public as a whole”.

Such corporate philanthropy is not just a gimmick either: Arnaud made it absolutely clear that the terms of the foundation’s lease, which started in 2007, are for 55 years only. After that, in 2062, the foundation will become a gift to Paris, the most visited tourist city in the world.

There will also be strong links between the new building and LMVH related projects in the Middle East. A developer with ties to the designer label is to help build a 168,000sq m mall on Saadiyat island, connecting Abu Dhabi’s own world class museums, the Louvre, Guggenheim and Zayed National Museum.

Abu Dhabi Tourism and Culture Authority (TCA Abu Dhabi), the mastermind of the Saadiyat project, has announced a joint venture with L Real Estate, the private equity fund in which Arnault is an investor. L Real Estate, which specialises in luxury shopping, will work alongside TCA Abu Dhabi to develop the three-storey mall on a 17-hectare plot of land in the new cultural district.

Back in Paris, Anne Hidalgo, the mayor of Paris, paid her own tribute, saying: “The Louis Vuitton Foundation is a true gift for Parisians. I am thrilled that it will be a major addition to the city’s attractiveness.”

Beyond the formality of the October inauguration, which was attended by France’s political elite and the fashion bourgeois, it was, however, the enthusiasm and, indeed, sheer joy of Arnaud that shone out. Pressed about rumours that the 100 engineers and 3,000 builders who constructed the foundation building had gone well over budget, the passionate art collector made it clear he just didn’t care. Encouraging everybody around him to share in the new love of his life, Arnaud said: “You don’t put a price tag on a dream.”