Born in Gaza in 1980, Hazem Harb came of age during the intifadas. The impact of war and conflict has a profound influence on his solo show, The Invisible Landscape and Concrete Futures, currently running in Dubai’s Salsali Private Museum. The exhibition explores architecture within the context of the Palestinian-Israeli conflict. Photos of Palestine from before 1948 are superimposed with the Bauhaus-style architecture the Israelis brought to the landscape.

The vintage photos are based on the Orientalist notion that Palestine was a “land without a people and a people without a land,” says curator Lara Khaldi. “Even when you see people in the original images, they are merely there as ornamentation. The concrete figures are an icon of the Israeli occupation. It brings a sense of foreboding and looks at history from a futuristic point of view.”

Harb’s exhibition also features architectural models, sculptures, installations and a series of short videos, questioning how certain architectural styles can delete or cancel out others and what their role is in a hierarchical structure of power.

In one installation, he explores the history of the Baramki house, a Palestinian home built in the 1930s, which was later appropriated by Israelis in 1948. Many such buildings were re-purposed into homes for Israelis but in the case of the Baramki house, it was converted into a museum. Khaldi says: “Even though the architecture still stands, there is a destruction of narrative.” 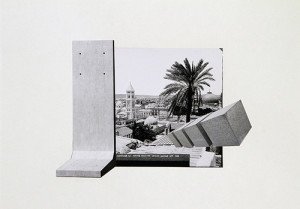 Harb left Gaza for Italy in 2004, enrolling in the Academy of Fine Art in Rome on a scholarship. His career has gained considerable traction in the last several years. In 2008, he was shortlisted for the AM Qattan Young Artist of the Year award. His work is in the collections of the British Museum in London, the Centre Pompidou in Paris and Durham University’s Oriental Museum in the UK.

Still, Harb finds it difficult at times to reconcile this charmed existence, living between Rome and Dubai, with the continued conflict in his homeland. It is this duality that continues to inspire his work.

“I was born there. I experienced the war and the conflict,” he says. “There was a very big effect on my life. But then everything changed because I experienced two lives in my life.

“I always have this memory on my shoulder of the past. I think about this black and white contrast between past experience – or at least the image you have of that experience – and my current life in Italy, which is this space of love, romance and nature. I always have this mixed feeling, thinking about [Palestine] and sometimes it is worry and headache. You are in a safe place, they are not.”