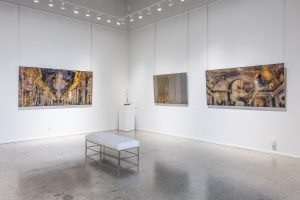 Canadian artist, Nicolas Ruel, represents the epitome of what we like to call, a self-proclaimed global citizen. Inspired by his travels to seventy cities, scattered across forty countries, and five continents; he dedicated his life’s work to capture and unveil humanity’s most delicate moments, using a variety of different mediums.

His unique visual signature, developed with an impressive in-camera double-exposure, is a tribute to our planet’s most fascinating historical sites, architectural splendors and lifestyles.

“When I arrive in a new location, I immediately start looking for two subjects and two angles that I will superimpose in-camera to create a new dimension” he shares.

And a new, unattainable dimension, is exactly what he displays. Exploring the evolution of civilization and cultures, his work represents a “creative capsule of humanity” he explains.

“The more I travel, the more I notice that the territory itself is the canvas,” he says. “Compared to a painter who starts with a white canvas, I’m lucky to start with a space, a city, built by thousands of people.”

Through a futuristic angle, Ruel highlights the monumentality of his subjects while bringing the metallic surfaces to life with shimmering inks.

“Photography is my personal language,” Ruel shares. “My vision of the world is seen through the lens of a global citizen, which brings together multiple perspectives and viewpoints to capture rare moments and evoke emotion with my pieces.”

Ruel will premiere his most recent work, printed on 24k gold, at the Royal Paddock at the Formula 1 in Abu Dhabi.

Ruel’s art has been featured in international magazines such as Vogue and National Geographic, as well as in exhibitions around the globe. From Montreal to New York, Paris to Tokyo, his series are a part of numerous public and private collections, including Air Canada, Cirque du Soleil, Montreal Museum of Fine Arts, Museum Europäischer Kulturen, Power Corporation, Microsoft, and The Rothschild Group.