It is an idea that will horrify some art collectors: investing in art to unabashedly make a profit, rather than for art’s sake itself. For The Fine Art Group founder and CEO, Philip Hoffman, controversy is part of the job; he relishes it. During a speech to the London School of Business in 2014, Hoffman recalled an incident where Mera Rubell, a billionaire Miami art collector publicly ridiculed him – expletives included – for the way his company “invested in art”, something she considered sacrilegious.

Hoffman, who set up his art business in 2001, has gone on to gather assets worth $350-400 million and counting. His group has expanded into nearly two dozen countries and there’s now a concerted push into the Middle East.

The Fine Art Group has a business plan that’s straightforward. At the time of inception in 2001, it was primarily an investment vehicle. The commodity was fine art. The first fund was launched in 2004 and raised $25 million. Through this the group purchased museum-quality blue-chip art. It operated exactly like any private equity long-only structure fund, if you will. However, post downturn, there was a change in attitude of its clients. People were no longer comfortable with locking their money in, so the group created a new service that allowed the client to buy and sell their own artwork — similar to what banks term as a discretionary portfolio.

“Whenever I tell people about my business for the first time, they don’t fully understand the concept,” explained Salma Shaheem, head of the Middle Eastern market for the London-headquartered The Fine Art Group.

“’Are you a gallery?’ No. ‘Are you an artist?’ No. The best way I explain it to them is that I am like your stockbroker. I don’t have any inventory. I give you an objective view of the art market, and I tell you when is a good time to buy and to sell.”

Shaheem, who was born and raised in Dubai, moved to London where she studied finance and art history at Richmond University. “My thesis was art as an alternative asset class. At that time, there were two firms doing this. One was The Fine Art Group, the other was Daman investments.” She opted for the latter, and after finishing her studies in 2008 returned to Dubai to work on Daman’s art fund – where she stayed for two years until she met Hoffman. “When we met in 2010-2011, I told him that the Middle East market cannot be a briefcase business. You cannot send a rep four days every month to come and sweep the market. There’s a lot of handholding,” she explained.

Hoffman listened and sent Shaheem to learn the tricks of the trade in London where she trained for two years, before returning to Dubai to open the Middle Eastern arm of the business in 2012. “From then on I had to build my rolodex, one client at a time.” Since then, the business has mushroomed enough to justify opening an office space in Dubai’s Business Bay district.

Like their business model, Shaheem’s advice to clients isn’t complicated provided you have a small war chest to play with. She recommends an initial investment of $130,000 to $500,000. For this you’ll also get non-partisan advice about how and what to buy — she tips us off that the smart money right now is riding on post-war and contemporary artworks. “Historically, if you collected the works of Old Masters and some impressionist from Italian, Dutch and French artists, your status on the collector food-chain was at the top. Today, the market has shifted rapidly into post-war and contemporary art. The Giacomettis, Monets, and Manets, DeGrazias and Picassos are still very important – but there’s a new wave and a big shift in the appetite for contemporary art.” 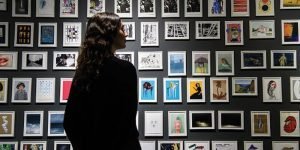 Shaheem has an overarching view of the art scene in the region, and she’s enthused by what she is seeing. “As an emerging market, we’re on the right track,” she says. “We’re seeing artists like Mona Hatoum and Monir Farmanfarmaian featured in museums like the MET, MOMA, and at the Guggenheim in New York, and this is huge. Middle Eastern, Iranian, Pakistani, Iraqi and Syrian is considered emerging.”

In the UAE, she points to Sharjah’s strong cultural identity and the success of the Sharjah Biennial, which attracts foreign contemporary artists from outside the region, like Danh Vo and Lynette Yiadom-Boakye, alongside artists from the emirates. However, the Iranian art expert says that the best example of Dubai’s exploding art scene is Alserkal Avenue that has grown organically into a hub for galleries. While Abu Dhabi, she says “is like the older sibling with the more prestigious museum projects like the Louvre and the Guggenheim.”

When it comes to making money in art, Shaheem is hesitant to mention the rates of return that investments on art will fetch, but she does concede, “returns of over 90 per cent cash on cash, for historical pieces and 30-50 per cent cash-on-cash for young artists.” Admittedly, very few will see the wild returns on investments like the Stuffed Shark by Damien Hirst that Charles Saatchi purchased for $50,000 in the nineties and sold to Steve Cohen for $12 million a little over a decade ago.

Yet, there is a sound business case to be made in investing in art. As she says, “Art is a hedge against an unstable economic environment. Photography or prints or painting – whatever the medium, the value of the artwork will never go down to zero, unlike a stock might.” Though, Shaheem and her boss Hoffman’s definition of ‘appreciating art’ will always be polar opposites to that of Rubell.