When eight-year-old Faig Ahmed decided to cut up his grandmother’s traditional Azeri carpet, she was livid. Bored by its conventional interlocking shapes, he decided he could improve it and chopped it into pieces to rearrange the design. While his family was less than impressed, the early childhood experience proved to be a seminal moment for the Azerbaijani sculptor and artist. 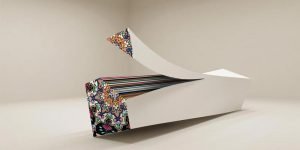 After graduating from the sculpture department of the Azerbaijan State Academy of Fine Art, Faig Ahmed went on to work in several mediums, including painting, video and installation. He has been experimenting with carpets for seven years.

Growing up in Baku, Ahmed observed that carpets were one of the most impregnable, unchangeable representations of the Orient. His current work transforms the carpet from a passive object in a room to something provocative. 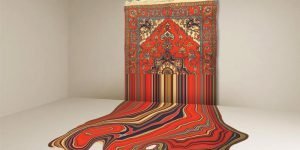 In one piece, entitled Shift, a carpet is tilted at a 45-degree angle and pierced through with spikes. In another, a rug hung on the wall melts onto the floor in pools of coloured thread. In Cone, a traditional geometrical shape is taken from the pattern of the carpet, rendered three-dimensionally, and then superimposed onto carpet. The juxtaposition of the geometrical form is shockingly alien even though it is one of the carpet’s intrinsic forms. 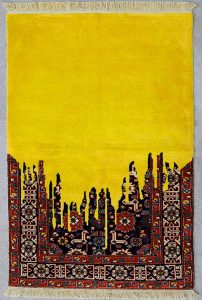 The carpets are made from naturally dyed silk or wool from Iran. Ahmed employs female weavers from Azeri villages who follow the same techniques as they have for generations. He only changes the concept and design of the carpet. Depending on the complexity of the design, these pieces can take anywhere from two months to a year to complete.

“Subconsciously people want to rely on something really old, to see their roots, and that’s why they’re choosing a traditional carpet. In the same way religion is connecting different types of people from different countries, the carpet is connecting people from this region, this country. I think people who like my work want to feel like there should be a change. They want big changes to happen in their lives,” he says.