An Expression of Heroes and Antiheroes

Kourosh Nouri, founding director of Carbon 12 gallery in Dubai first met twenty four year old Austrian Artist Philip Mueller in 2008. “I will never forget when we visited his studio for the first time,” recalls Nouri. “He showed us a very large painting of a crocodile on brown shopping bags at least 3 metres wide. That was one of the most incredible emerging artworks I had ever seen in my career.”

Mueller’s explorative journey has so far been considerably successful— with over ten international exhibitions, three art fairs and an important museum acquisition under his belt.

‘My Father was Many and I am Happy as a Sailor Part II’ currently showing at Carbon 12 is the third part of a series of artworks by the young artist who has embarked on his own personal voyage— an odyssey through which he shares the many layers of his psyche, personality, history and imagination. 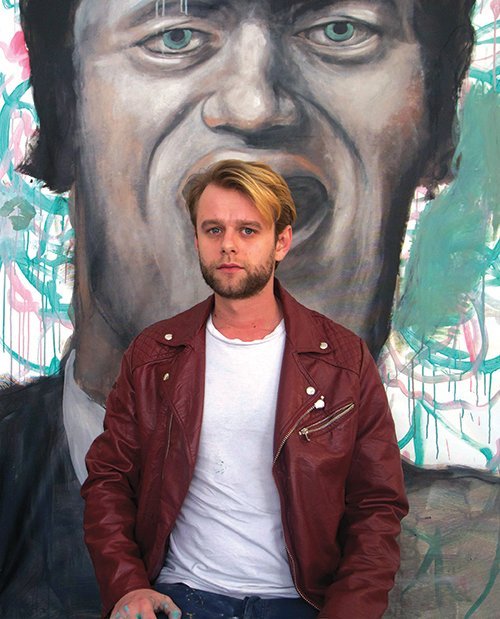 The ‘Fathers’ that Mueller refers to describe the multiple characters that we each have within us. He adopts characters from the passages of time, fiction, legend and creation. Contrasting figures such as Che Guevara, Hercules, Beethoven and Grace Jones, each representing a different trait. In the piece ‘Hercules just killed Beethoven’ the artist makes a comment on the absurdity of physical power winning over beauty.  In ‘Jonny, Phillis and Mentos’ three figures reveal the different moods of the artist. Sporty Jonny versus the excessive Phillis blighted by an angry Mentos. Ultimately Mueller’s quest is to explore the fundamental questions of life— where are we coming from and where are we going?