You have to read our work like a book,” says Christo, the artist known for his venerable sculptures of scale that are equal parts complex and controversial. Christo Vladimirov Javacheff is in Dubai to attend the city’s annual art fair, Art Dubai, but mostly he’s here to work on his long-awaited project in the UAE desert, The Mastaba.

Christo’s projects around the world, such as the wrapping of the Reichstag in Berlin, the Umbrellas project in Japan and the Gates project in New York’s Central Park were, for the most part, designed as temporary installations. His most recent installation, Floating Piers, a three-kilometre stretch of fabric-covered pontoons between an island and the shore of Lake Iseo in Italy, was the world’s most visited work of art in 2016, attracting 1.2 million people over 16 days last summer. 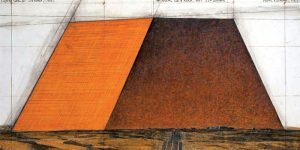 The artist’s rendering of The Mastaba

When asked about the complexity of his work, the 82-year-old, who fled his native Bulgaria in the ’50s for Paris, where he met his late wife and collaborator, Jeanne-Claude, before later settling in New York, explains that his works have many elements beyond any sculpture or painting. “They have similarities to architecture and urban planning, like building airports or streets. If you start to read the projects that way, you understand them beyond the traditional idea and object of art.”

He added, “My projects are about real things. You need to walk three kilometres on the floating pier, or two and a half kilometres on a pedestrian street. Feel the real wind. The real wet. Not photographs or films but the real thing, things galleries do not have.”

Christo is unapologetic to his critics who point out that it’s difficult to experience or fully comprehend his work if it no longer exists. He points to the Reichstag as an example of his most impactful temporary work. “There were millions of people walking around the Reichstag touching the fabric and pulling the fabric and watching it moving in the wind. You don’t see anybody walking in the streets of Dubai touching the buildings. That is the story of this project. My works are very sensual and involve so many things that are beyond the normal object of art. This is why that fragility and that fleeting dimension are there; nobody can own them or buy them. They are examples of freedom.” 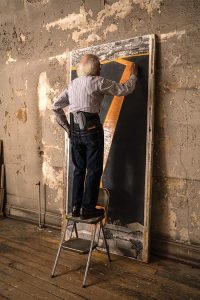 Christo and his late wife, Jeanne-Claude, who passed away in 2009, self-financed their own projects and have always marched to their own beat. And while most of their work is temporary, each project has been years, sometimes decades, in the making. For example, last year’s Floating Piers project, Christo’s first outdoor installation since 2005, invited the public to walk on water on a lake in Italy. It was originally conceived in 1970 and was supposed to be realised in Argentina and subsequently in Tokyo.

“We were working on the Valley Curtain project in Colorado in 1970 when we had a visit from an Argentinean art professor. He invited us to do some work there. This is when I first got the idea to do a project where you can walk on the water,” says Christo. As the project was in its early stages, Christo says he only presented drawings and it wasn’t until the wrapping up of the Reichstag in 1995 that the couple started to think again about the idea of doing a floating pier, but this time in Tokyo Bay.

“We needed tranquil water like a lake, and we already spent a lot of time in Japan with the Umbrellas project, so we thought it would be a good place to do it.” However, Jeanne-Claude and Christo were refused permission and after “a fight with the city of Tokyo” they walked away from it. That is, until Christo found Lake Iseo near Brescia in Italy, which is the biggest island and salt water lake in Europe.

Despite the false starts over the years, the Floating Piers turned out to be one of Christo’s fastest projects to come to fruition. “It was realised in less than two years. We have never had a project realised so fast, but again that is luck,” he says. “And for the first time, over 16 days, the people of the island were walking on the water.”

Time is something that the elderly artist doesn’t rush. He’s probably had more rejection in his career than most; over the past 50 years, Jeanne-Claude and Christo have realised 23 projects and had another 36 projects rejected due to planning permissions. Yet the couple persevered, juggling multiple projects at any one time but never being afraid to shelve something that they’d fallen out of love with. “The projects that we failed to realise are the ones that we lost interest in,” Christo says. “We lost passion, like a normal artist in his studio who has a big canvas that he fills with colour and at some moment fills it with too much colour; he lost interest in the work. That is all.”

Once the art fair wrapped up, Christo was leaving for the UAE desert, where his 40-year project, The Mastaba, is ongoing. He’s there to work on his preparatory sketches and drawings of the project, which are rumoured to fetch millions of dollars.

Once realised, it will be the largest sculpture in the world, comprising 410,000 multi-coloured aluminium barrels reflecting Islamic geometric patterns that will stand 150 metres tall, 225 metres deep and 300 metres wide at the vertical walls. “It will resemble a speculator pyramid set in an ascending form reaching a plateau of 126.8 metres wide,” he says. 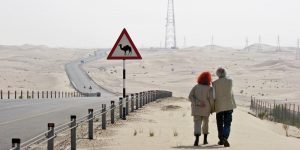 While the project has been a long time in the making, the artist says that once the engineering work is completed, the mammoth structure can be elevated in a matter of weeks. “Engineering-wise we are ready to go. Nothing in the world will be built like this again. You cannot believe how we will build this. It will be innovation in less than two weeks. On a very flat surface it will rise to 150 metres in ten days.”

In terms of cost, it’s unlikely that this project will top Christo’s 1991 Umbrellas project (a simultaneous project in California and Japan), his most expensive project to date, that cost $36 million. However, unlike the Umbrellas, The Mastaba will live on as a permanent structure in the empty quarter, deep in the UAE desert on the border with Oman and Saudi Arabia and is likely to be Christo’s legacy piece.