A new gallery in Dubai brings the splendours of Central Asia to the Middle East.

DIFC’s newest gallery, Alif, will be showcasing contemporary Central Asian art in the region for the first time. Alif is the brainchild of art collectors Gayane Umerova and Natalya Andakulova, both born and raised in Uzbekistan before moving to Dubai and London respectively. 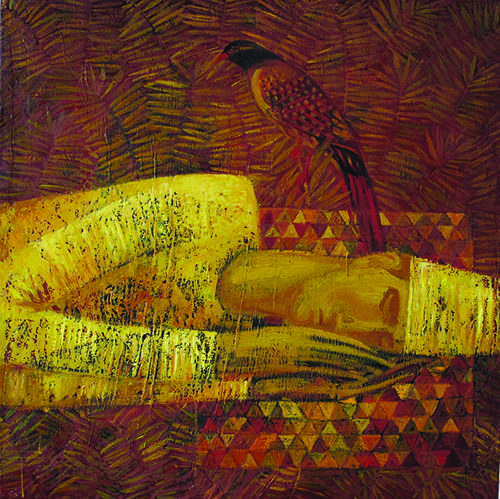 “The Central Asian art market is relatively young but already is a well-established market within the Central Asian region although the experts say that there is more interest from overseas in the local artists than there is from the actual region,” Umerova conceded.

The two patrons of Central Asian art say they don’t want Alif to turn into “a pure commercial business” and would instead rather be viewed as “ambassadors of the culture and art scene of Central Asia in the Middle East.”

We would like to be ambassadors of the culture and art scene of Central Asia in the Middle East.

The starting period of Central Asian art dates back to the late 19th-early 20th centuries when Russian artists such as Pavel Benkov and Aleksandr Volkov travelled to the region in search of new meanings of expression, inspiration and environment. According to Umerova, these artists established art schools in central Asian countries where they had regional pupils who came to study traditional easel painting. The pupils subsequently passed on their knowledge and skills to other regional artists.

There are several art hubs in central Asia, mainly in Uzbekistan, Kazakhstan and Kirgizstan. The most recognized is in Tashkent, where Andakulova studied at the Republic College of Art, paving the way for a career in art and Umeroba has since curated a number of exhibitions including the 6th Tashkent International Biennial of Contemporary Art.

“Once the gallery has successful started up we are planning to set up a foundation which will support the collateral shows in the Middle East and Europe to help the art scene to expand and central Asian artists to get more international appreciation and recognition,” says Andakulova.

Timur D’Vatz Myths and Legends will run 31 January through March 2013.