Is Sweden the EU’s most innovative country?

It has already pledged to become the world’s first country to run entirely on renewable energy by 2040.

With a population of just under 10 million, Sweden punches well above its economic weight. Its GDP stood at a healthy $493 billion last year, and it has pledged to become the first country to run entirely on renewable energy by 2040. With one of the highest economic growth rates in Europe, it’s an island of stability and prosperity tucked away in one of the northern-most corners of the map.

But it is also facing the same twin concerns the rest of its European brethren are, namely the refugee crisis and the potential weakening of the European Union following Brexit. Sweden took in a national record of 163,000 asylum seekers in 2015 – less than 500 of who were able to find work, according to an investigation undertaken by Swedish public broadcaster SVT. Anti-immigration and Eurosceptic sentiment is flourishing in the socialist country, with the ‘Swexit’ movement gaining rapid momentum.

Håkan Persson is Managing Partner at Stockholm-based international firm Experia Corporate Finance Advisors, which specialises in advising globally on Nordic firms. Despite the country’s current trials, he is full of measured optimism about its prospects given the long history of stability. From the time of industrialisation, Sweden shot out in the global economic standings thanks to export income from iron ore, wood products, chemicals and, later on, healthcare and motor vehicles – think AstraZeneca, Saab and Volvo.

By the Seventies, the country was one of the leading global economies. Persson says it’s those old-gen sectors that laid the foundations for today’s entrepreneurial economy – one that topped the European Union for innovation according to the European Commission’s 2016 European Innovation Scoreboard. “We have a modern industrial infrastructure with all the old natural resources and things like that, all way behind us. We are a lot into technology – [sectors like] IT, software and gaming.”

Some of the biggest technology companies were born in Sweden, from mobile company Ericsson to telecommunications maverick Skype and the app that revolutionised music consumption, Spotify. Persson says despite its European heritage, Sweden is very American in its bold and ambitious outlook, coming a close second to the technology super-economy in per capita so-called ‘unicorn companies’ – start-ups valued over $1 billion. The country is internationally facing by necessity, he says, given its small domestic market, while its citizens are well educated and well travelled, bringing back ideas from distant lands. “We are like a sort of satellite to the US by tradition – we’ve always looked very much at the US in terms of technology, development and culture.”

Sam Myers is a principal at UK- based venture capital firm Balderton, which invests primarily in early-stage tech start-ups in Europe. Myers spends much of his time scouting for new talent in Stockholm. He says Sweden has become a tech hotspot thanks to fertile soil. “Past success breeds future success. Once you’ve had a few companies do well and become global companies, the founders tend to stay in their countries and reinvest or help with new networks. It’s very much an ecosystem that’s building these companies from an early stage into global winners.”

Myers says such prospects are perfect for high net worth individuals to invest in as they require a lot of early capital, but the rewards can be vast. He says Sweden tends to be the best market in the Nordics to invest in thanks to high education levels and entrepreneurial verve. All the old sectors like health, automotive and communications are still great prospects, but he says Sweden’s technological wand is lifting the economy across the board, through things like mobile apps. “It’s the most interesting sector to look at. The digital revolution is hitting every industry… it’s more new tools and new markets bringing many different industries to a new level.”

All of this means there are strong opportunities for Middle Eastern investors and despite the refugee backlash, Myers and Persson say the country remains tolerant and open – something affirmed by Swedish Ambassador to the UAE Jan Thesle. “The refugee influx is a challenge. It puts this region and also Europe under unprecedented pressure. It’s unprecedented since World War II. However, if you look at receptiveness in Europe to immigration…Sweden is the most positive of all European countries.” Thesle says the influx of refugees represent close to two per cent of the population, an “enormous challenge” to resources like housing and schooling. 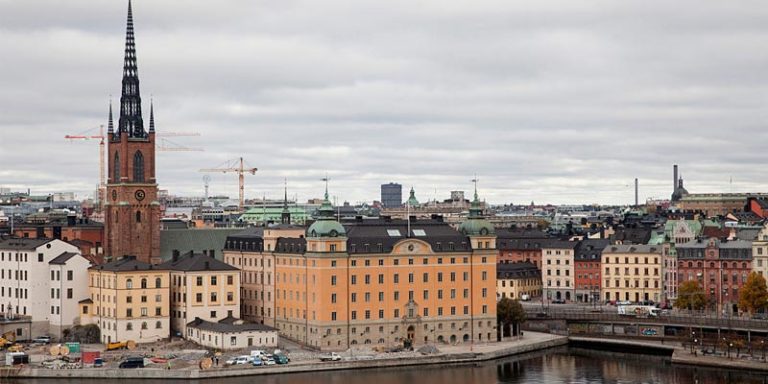 “But so far we are managing this. We still have a very healthy economy by European standards, we still have a low inflation rate and we still keep our budget in balance and we have proven so far – we’ll see what the future will bring – that we are sailing on the bumpy waters of this crises.” Refugees have been coming to the country for decades, he says, and, while it presents initial challenges, the net effect has always been positive.

As for Swexit, a recent poll suggested 64 per cent of the population wanted to see the country remain in the EU. In terms of investment, Thesle highlights the strong ties between his country and the region. “We have some of our major export markets in this region in countries like Saudi Arabia, the United Arab Emirates [and] Egypt.” Sweden and the UAE last year signed a three-year MOU to foster cooperation and create networks to develop small and medium enterprises and enhance research and development. Meanwhile, penetration of Swedish multinationals like Ikea and H&M (which some people “may not know are Swedish even though they are yellow”) is high across the Middle East. But there are many good reasons for investment to travel back in the other direction too, Thesle says. “Sweden has proven since the early ’90s to be one of the most economically and politically stable countries in Europe. The early financial crisis at the beginning of the Nineties brought with it a reform policy that has led to stability for the past 25 years. We have seen how we have weathered the storms in the latest crisis in 2008.”

Sweden ranked eighth in the World Bank’s ease of doing business index, Doing Business 2016, while Thesle points to the country’s high transparent governance and corporate tax rate of 22 per cent that is one of the lowest in the OECD. The country’s private enterprise, government and academic arms have a “very unique” symbiosis that works to boost the economy, given much of the success story is research-and-development-based, he says. “That’s why we are where we are today.”