Saint Lucia’s citizenship by investment program is amongst the best in the world and is helping build up the nation’s economy.

Saint Lucia is the kind of island that adventurous voyagers dream about – a small, lush tropical gem that is still relatively unknown. Located midway down the Eastern Caribbean chain, in the midst of Martinique, St. Vincent and Barbados, Saint Lucia is set to stun anyone who embarks on its calm Caribbean shores. The island is only 27 miles long and 14 miles wide, with a shape that is said to resemble either a mango or an avocado, depending on one’s taste.

Almost a year ago, the picturesque island joined the Citizenship by Investment industry announcing the launch of its Program during the Global Citizen Forum in Monaco. Since then, Saint Lucia has attracted a number of international investors who seized the opportunity to own a piece of paradise. However, she is not just a pretty face. The country offers one of the most competitive and well-crafted citizenship by investment programs not only in the region, but also worldwide. The government is committed to establishing Saint Lucia as a prime destination for investors and the recent announcement of a series of improvements to the Program, is testament to that commitment. 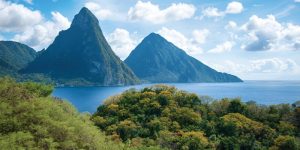 Even though Saint Lucia has been part of the Commonwealth since the British secured the island in 1814, historically it has relied heavily on tourism for its economic development. As a result of the global financial crisis of 2008, the country was forced to look for alternative ways to fund its economic development. It was then when the local administration started exploring global citizenship as a sustainable channel for Foreign Direct Investment. As a result, applicants can now obtain Saint Lucian citizenship by making a donation to a National Economic Fund, which supports government projects of strategic social and economic importance. As of January 2017, there has been a significant reduction in the contribution thresholds, which is an indication that the country is emphasising this investment option and its potential for impact.

Through its citizenship program, Saint Lucia has been able to prove that besides its white sandy beaches and bath-warm waters, it is open for business and has a lot to offer. The international jetset community now view the country not only as a popular holiday destination, but also as a place where they can invest their money. The fact that investors are not required to travel to the country in order to qualify for citizenship, makes the program ever more desirable. The Saint Lucian passport secures visa free travel to the UK and the entire Schengen area.