Tourism-based economies have been vulnerable in the past. The tiny Caribbean island of St Kitts and Nevis, however, which had previously been dependent on the sugar industry until 2005, when it failed due to falling profits, is now a blueprint for surrounding Caribbean nations.

A key to its success has been its government-sponsored Citizenship by Investment Program (CBI). Foreign investors and their families can apply for St Kitts and Nevis citizenship, allowing them visa-free travel to more than 120 countries, including Canada and the UK – a golden ticket for Chinese, Middle Eastern or Russian investors.

St Kitts has the longest running and most established of all the CBI programmes worldwide and “has allowed the government to attack growth from several directions,” according to Denzil Douglas, prime minister for St Kitts and Nevis.

It also acts as a blueprint for European countries like Bulgaria, Hungary and Cyprus, which have emulated St Kitts model to attract wealthy foreign investors to their shores through Immigrant Investment Programs (IIPs). And closer to home, many neighbouring Caribbean countries have followed suit in a bid to help their ailing economies.

Where the tiny island of St Kitts’ strength lies, though, is not in its sole ability to carve out effective immigrant legislation for the wealthy but its relentless pursuit of sustainable living.

“The best asset of this island is its natural beauty and we want to preserve it,” says Val Kempadoo, a former horticulturist, organic farmer and the property developer behind Kittitian Hill, the focal point of a sustainable living project on the island. 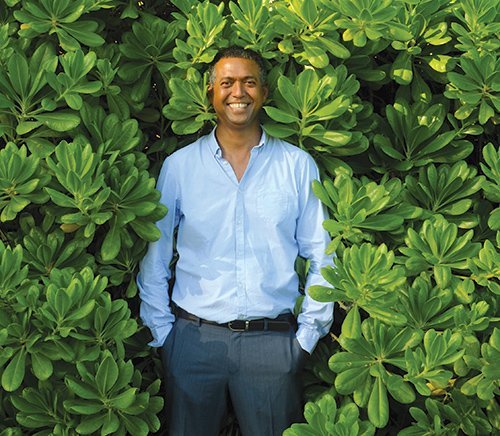 The 162-hectare development has four hotels, an organic farm, an ‘edible’ golf course built on organic farmland, restaurants, spa as well as film studios for the local community. The Caribbean-born entrepreneur hopes Kittitian Hill will become a benchmark of sustainability for other large-scale developments.

“Working with the community is crucial to the Kittitian Hill business model, which has been developed to be economically sustainable and based on fair trade principles, active local recruiting, training and collaboration,” says Kempadoo.

In line with this business model, Kittitian Hill is creating an academy to train locals in hospitality whilst employing local contractors to build the project. That means that the millions of dollars spent on constructing the development are feeding back into the local community and having a direct impact on the local economy.

“We are aspiring to make Kittitian Hill a hub for creative arts for the Caribbean and for the world,” says its creator. To that end, Kittitian Hill has incorporated a film institute, a residency programme for artists and writers throughout the year and will host music, art, culinary and literary festivals for guests and locals in the development’s village, which is due for completion in late 2015.

So will the creative liberal ethos of the resort translate to the clientele?

Kempadoo says he is targeting high-end rather than high volume but is aiming for a less conservative clientele: “Our guests are progressive, edgy, arty – filmmakers and advertising executives. They go to the Tate Modern, eat in farm-to-table restaurants and like art, culture and travel.

“People today are seeking authentic experiences. They do not want to have a holiday which they feel is imposed on a destination but want to feel integrated and meet the local people.”

That all-round experience goes right through to the menus, where the recently appointed chef Christophe Letard makes the Kittitian Hill organic farm-to-table philosophy a reality. Spearheading the commitment to a sustainable cuisine where the approach to food is seasonal and local, he will create daily menus with locally and regionally inspired fare, all prepared with fresh ingredients directly foraged from the onsite Belle Mont Farm and seafood sourced from fishermen in the community.

Meanwhile, the spa, which will also open towards the end of next year, is set to become a destination spa in its own right with 16 treatment rooms and four specialist rooms, all designed in vernacular Kittitian style. The spa team is currently researching all the local and regional indigenous treatments in order to offer a menu that is rooted in the history and culture of the area.

For Kempadoo, the real success story will the legacy of Kittitian Hill, which has already attracted attention from other Caribbean governments keen to do similar projects. However, he is mindful it is still in its infancy and has plans for future projects, including Kittitian Hill Institute, a place for aspirational thinkers to gather.

“It is important for St. Kitts to be selective and careful about development and focus on high-end rather than high volume tourism,” he says.

“We designed not just buildings and landscapes, we designed Kittitian Hill to be an experience unlike any other in the world.”