A Stake in the Sun

The picturesque Caribbean island of Saint Lucia is the latest country to join the global citizen industry by offering foreign investors the opportunity to own a stake in the island and receive citizenship.

Besides its white sandy beaches and bath-warm waters, Saint Lucia is famed for its drive-in volcano—where you can drive right up to the edge of its sulphurous springs—and its lush Pitons, dramatic volcanic peaks which frame the tropical landscape, making it one of the most popular Caribbean holiday destinations among the jetset. 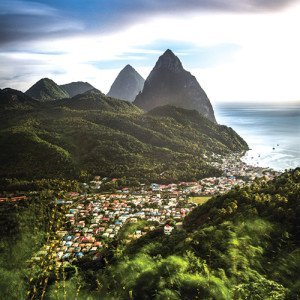 Until recently, the country’s citizenship had not been used to generate income, even though it has been part of the Commonwealth since the British secured the island in 1814.

Saint Lucia has relied heavily on tourism and foreign investment for its economic development. Whilst tourism has fared well, there has been a significant decline in foreign direct investment as a consequence of the present global economic recession. This has forced the government to look for alternative ways to source funding.

Saint Lucia introduced a value added tax in 2012 of 15 per cent, the last country in the eastern Caribbean to do so. In 2013, the government introduced a National Competitiveness and Productivity Council to address Saint Lucia’s high public wages and lack of productivity.

The latest attempt, however, is expected to be the most beneficial yet at generating cashflow. Saint Lucia’s government is offering wealthy foreign investors the chance to buy their own slice of paradise and as an added bonus, receive citizenship without having to live on the island. The Saint Lucian passport allows holders to travel visa-free throughout Europe and the UK.

The Saint Lucian government is expected to announce its Citizenship by Investment Programme (CIP) at the annual Global Citizen Forum in Monaco on October 8.

While admitting they are latecomers to the industry, the high commissioner for Saint Lucia, Ernest Hilaire, says the island is already more competitive than its Caribbean counterparts, adding the introduction of a CIP would only enhance its edge over its neighbours.

He says: “The citizenship by investment option has become quite attractive as it makes the financing of projects easier and cheaper for investors and provides that added incentive of a passport.”

When asked why the country has been late to the party, Hilaire says its approach “as a country has never been a rush for numbers but instead to search for quality. We intend to be guided by that principle”.

The government will present an overview of the programme and the requirements for citizenship through investment at the forum in Monaco, which gathers together immigration experts and industry leaders from European and Caribbean countries offering immigrant investment programmes. The opening date for applications is also expected to be announced during the forum.

Saint Lucia’s parliament passed legislation for the CIP last month and published a list of regulations after installing a national task force to undertake a detailed study of CIPs, which later presented a report to cabinet ministers with a list of recommendations, followed by a public consultation period.

“We are at a critical point in the region where we need to find new ways to attract foreign direct investment and finance development projects but we also need to convince the public that we have considered all the aspects of implementing such a programme,” Hilaire says.

“We believe we have done the necessary work and have sufficiently prepared to implement a highly successful programme.”

Saint Lucia’s prime minister, the Hon Dr Kenny Anthony, says the new CIP would help the government attract loans to fund the construction of roads and schools and sustain health management programmes, including the opening of two up-to-date hospitals, as well as catering for the young and sports industries.

“The cost of government borrowing is becoming unbearable,” he says. “A successful CIP will assist tremendously in this regard.

“Of course, the attraction of more developers in the hospitality and property sector will immediately create more jobs for our unemployed. Increasing our hotel stock will strengthen our tourism sector and have multiple spin-offs in the economy.”