Sallyann Della Casa is the founder of the Growing Leaders Foundation but that is not how she introduces herself to an audience. “That sounds flat so I tell them that I wake up leaders,” she says. “I develop programmes to awaken people’s potential. Immediately ears prick up. People judge you in seven seconds. Have a mantra that is 12 words or less and make it exciting so people want to listen to you.”

The 38-year-old, who calls herself ‘dreamer-in-chief’ and ‘lead tree shaker’, now employs a small team to train leaders in the UAE, as well as another 15 in the Caribbean, India, Qatar, Pakistan and several indirectly in North America, where her programme is licensed to the non-governmental organisation Kids and the Power of Work (KAPOW).

Her teaching stints have included mompreneur classes at Dubai’s Impact Hub, corporate responsibility sessions for 65 global leaders for DP World and presentation skills training for finalists at the World Youth Summit Awards in Brazil. Yet Della Casa does not possess a single teaching qualification nor a formal education in leadership or curriculum design.

“My gift for teaching grew out of an intense love of learning,” she says. “I am that child who asked ‘why’ five times and coming from a female in a very traditional family, that was not accepted.”

Her family, who are from Trinidad and Tobago, emigrated to Canada when she was 11 and Della Casa was sent to boarding school in Switzerland. When she graduated from high school at 16, Della Casa took her first three degrees, in political science, Italian and French, all at the same time. “I would read five books at a time,” she says. “At exam time, I was the only one always in the library.”

Since then, she has notched up two more degrees as well as a professional doctorate in law. At 21, Della Casa opened her own law firm in Florida and spent the next nine years practicing law. “I hated every moment of it,” she says. “My aunt [Dr Linda Baboolal] was the first president of the Senate in Trinidad and Tobago so there were certain expectations. I was the black sheep and being a lawyer was my way of being accepted by my family so they could all think, ‘She’s a little crazy but she’s a lawyer so it’s okay.’ ” 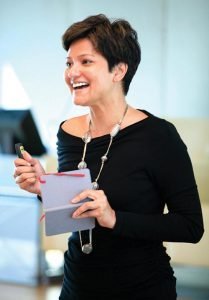 In 2004, at the age of 24, Della Casa had several attorneys working for her. But instead of focusing on practicing law herself, she spent most of her time volunteering as a teacher for the US government life skills programme KAPOW, which was run by the US National Child Labor Committee.

“I noticed the material was not connecting to the kids and started writing my own. That was when I first realised I had a gift for programme writing,” she says.

Her teaching ideas were later incorporated into the curriculum for all teachers to use and Della Casa was named volunteer of the year seven years in a row. Despite these achievements, by the time she hit 30 Della Casa felt she was not living up to her potential. “I was this revered young lawyer but I was on the wrong mountain. I knew I had to climb down, but I did not know which mountain to climb back up.”

Della Casa closed her law practice, notched up another couple of degrees (in urban planning and property development) and returned to Trinidad and Tobago in 2009 for the first time in 15 years when her father died. There she began writing curricula in leadership and testing them out on communities of mostly at-risk, disadvantaged young people. “I befriended one of the prison officers and started teaching in the youth jail,” she says. “I would hop on a plane to the Caribbean from Florida every two weeks. Everybody thought I was nuts.”

In 2010 Della Casa set up the Growing Leaders Foundation to take the curricula she had written and roll them out on a global scale, starting with schools in Trinidad and Tobago. Then she licensed the programme to NGOs and social enterprises for free and to companies for a $4,000 annual fee. More than 20,000 children have completed her programme in the last two years.

In 2012 she worked with motivational guru Robin Sharma, the author of The Monk Who Sold his Ferrari, to revamp his books as children’s leadership manuals. Later the same year she was approached by Abu Dhabi University and ATIC (now Mubadala Technologies) to train their staff.

Della Casa moved to Downtown Dubai three years ago with her hotelier husband. She works for UAE companies such as telecoms firm Du to cater to their leadership development needs, such as how to tackle cyber-bullying. in between all of that, she has already published a book on leadership called Who Will I Become.

Della Casa says despite her successes, there are times when she still feels like the black sheep. “Most of us, particularly women, have imposter’s syndrome. But I know now what I am doing and I have the confidence to know that if I don’t know, then I know how to learn it.”

On a trip back to Trinidad and Tobago last year, her car was at the traffic lights when she spotted one of her former students from the jail. “I opened my car door and came out and he hugged me. He said, ‘I have a job now and I’m saving up to buy a cooker to make popcorn to sell. I’m doing good. You should be so proud.’ It is moments like that when I feel like the most successful person that I know because I am truly making a difference in the lives of others.”