Inside the Middle East’s first self-defence studio for women

“The government has not been supportive at all, and it’s funny because I was even praised my Barack Obama. But I don’t do it for the praise; I do it for the social impact. I don’t wait for recognition from anybody,” says Lina Khalifeh, the founder of SheFighter, the first self- defence studio in the Middle East designed to empower women both physically and physiologically.

Khalifeh started SheFighter in 2012 in her native Jordan after she learnt of the physical and emotional abuse that a friend was being subjected to from her husband. Her anger and frustration manifested into not only a successful business, but also an educational movement empowering women in Jordan and beyond. However, she had had to rely on NGOs such as Oxfam and the European Union to fund the non-profit side of her business. Khalifeh describes SheFighter as a “hybrid business” comprising a profit-turning self-defence studio that trains women in martial arts and a non-profit entity that receives funding to help empower women through teaching them self-defence techniques as well as delivering workshops and seminars that teach women to become “more confident, secure and healthy.”

Khalifeh’s extensive background in martial arts allowed her to transform an idea that she conceived in 2009 into a social business by beginning to train women in her parents’ basement; setting the foundation of SheFighter, which opened three years later in the capital, Amman. The studio not only has been able to implement projects that aid local women, but also offers classes to men to help educate them on domestic violence as well as train countless students in schools and universities around the world. With an all-female staff working for her in Jordan, Khalifeh has ambitious plans to expand SheFighter throughout the region, as well as the UK, Canada, US and Latin America by franchising the brand to savvy business partners or NGOs. She has already created training manuals for prospective business partners to ensure the same level of training is delivered regardless if it’s to vulnerable women in the inner city of London or to Syrian refugees in Jordan or Germany. “I have the systems in place to be able to franchise SheFighter so the same rules will apply whether the training is delivered in Jordan or the US,” she says. “I’m actively looking for partners in the UAE, Kuwait and Turkey but they have to be business- minded,” she says, to ensure the franchise is sustainable.

Khalifeh has delivered self-defence training and educational workshops to over 2,000 refugees in Jordan and Turkey. However, despite following a self-developed curriculum, she says that they do have to alter their approach depending on their location. “We change the way we deliver our message at times, especially to Syrian women in refugee camps for example because they are different culturally to women in Jordan. They believe in early childhood marriage and that women should obey their husbands no matter what so we try to educate them in a non-aggressive way and let them love the training.

Khalifeh was in Dubai in October to receive the female entrepreneur of the year award at the Global Women in Leadership Economic Forum. She says the award came as a surprise even though since launching her company in 2012, she has received a slew of prestigious awards including, first place in the UN’s Women Business Global awards in Geneva in 2014, the Laureate Global Award in Brazil in 2013, acknowledging SheFighter as “one of the best social business ideas in the MENA region.” She was also part of the One Young World Summit 2015, giving a speech about the story of how she founded SheFighter. After picking up the award in Dubai, she was en route to Prague to deliver a TEDx Talk. 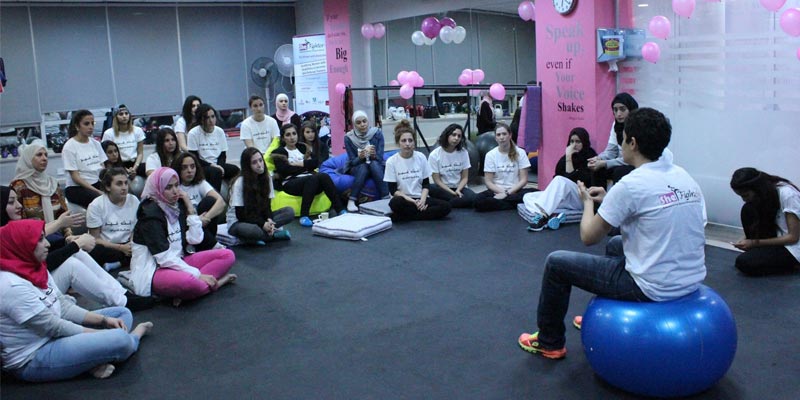 But perhaps the greatest testament to Khalifeh’s efforts was when the President of the United States, Barack Obama gave her a shout out in the briefing room of the White House during a global youth entrepreneur summit: “So far, Lina has helped about 10,000 women learn how to protect themselves; thank you Lina, we want to be your partner in helping women to live with dignity and safety.”

Although Khalifeh earned her degree in French Literature in 2007 from the University of Jordan, she went on to get certified as a personal trainer in martial arts. She’s keen to point out that SheFighter is a serious martial arts training centre, women must pass a certain level before they can move up the ranks and it costs roughly $90 per month to train four times a week. But Khalifeh says it much more than training a few nights a week. “There is a community feel, we celebrate events together and we party together.”

In 2012, UN-Women said that 32.3 per cent of Jordan’s women reported violence by an intimate partner and/or non-partner, and the country has a high incidence of ‘honour killings’. Despite Khalifeh’s efforts over the past four years, she says there are still a lot of vulnerable women, especially teenagers in Jordan and this is why she says she believes that Middle Eastern leaders must step up and start supporting movements like hers.

“The governments in the region don’t touch violence against women, they focus on speaking out about subjects like education for example. I feel if they support me, it would become a bigger movement because lots of people support our King and the leaders in the Arab world. But I won’t wait for them to show me recognition,” says Khalifeh.

She says that there is a marked increase in the numbers of parents signing their daughters up for self-defence classes in Jordan. “I can see that parents are now more aware that they need to teach their daughters self-defense and I’m getting more requests from schools and universities to come in and do workshops and help them to adopt SheFighter into their curriculum.”

While the private school sector has been relatively “easy to access”, she notes that the public sector is still sceptical of her training methods. “We have done training in a couple of schools for females but we had to stop because the minister of education told us that we were promoting violence for women and we are teaching women how to be violent,” she says, but she intends to “get to it later” once she has the proper paperwork in place.