GC spoke to Karam Foundation co-founder Lina Sergie Attar who is equipping Syrians with the tools required to excel professionally and rebuild their country.

Watching as optimistic protests calling for democracy descended into the brutal tragedy of the Syrian Civil War, there was never any doubt in Lina Sergie Attar’s mind that she had to act. “In 2011, truly it wasn’t a choice,” says the founder of the Karam Foundation, a not-for-profit organisation distributing vital aid on the front lines of the Syrian crisis. “The injustice, suffering and the need was so great, to stay on the sidelines was not an option.”

During Attar’s last visit to her home city Aleppo, in June 2011, she carefully photographed every surface of her grandmother’s home, sensing the storm of violence to come. What the Syrian-American philanthropist could never have predicted is that more than five years later, a war would still be raging, with no solution to the world’s largest humanitarian crisis since World War II in sight.

As we talk [in mid-December], the evacuation of Aleppo is midway, and Karam’s team are in the thick of the troubles, handing out vital food, blankets, mattresses and heaters to fleeing families who, like Attar, may never see their homes again. “It’s really not an evacuation, but an eviction,” says the 42-year-old. “Evacuation means taking someone out of a place of danger and sending them to a safe place – this is not what’s happening. This is people being forcibly displaced from their homes and sent to an unknown future and reality, joining the millions already displaced inside Syria. 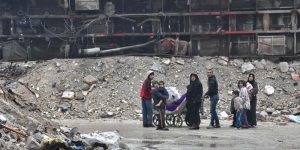 “It’s very, very heartbreaking. I don’t know if these people will become refugees – a return to Aleppo at this point looks impossible.”

Born in New York to Syrian-American parents, at the age of 12 Attar’s family returned to her father’s hometown, where she finished school and studied architecture at the University of Aleppo. After graduating in 1998 she returned to the USA to pursue postgraduate studies at Rhode Island School of Design, and later Massachusetts Institute of Technology, before marrying and taking a teaching position in Chicago. In 2007 she co-founded the Karam Foundation, named after the Arabic term for generosity. Long before the Syrian tragedies would unfold, Karam’s modest early goals were to raise awareness and funds for projects in Africa, India, Pakistan and Palestine, as well as local work in deprived Chicago communities, and helping Iraqi refugees resettle in Boston.

“It was the opposite of what we do now,” admits Attar. “It was a volunteer mission, a way to give a few hours every week and feel good about ourselves.” But following the events of 2011, the entire organisation was dramatically recalibrated into “emergency mode” to provide immediate humanitarian aid to the raging crisis in Syria. Visiting refugee camps that summer inspired Attar to expand Karam’s focus further onto sustainable development and educational initiatives for the growing generation of displaced Syrian children. 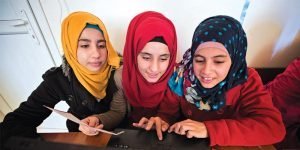 The work has been fast. Entirely volunteer-led until 2015, Karam now employs 16 staff members based in both Syria and Turkey – as well as enlisting hundreds of volunteers – its $2 million annual costs almost entirely met by voluntary donations. Celebrities like Netflix chat show host Chelsea Handler urged her followers over Christmas on Instagram to support the Karam Foundation. This month [January] will see the opening of The Karam House, a healing, growth and educational “innovation centre” on the Turkish border town Reyhanli, offering cutting edge educational programmes in everything from 3D modelling and laser technology to entrepreneurship and journalism.

“I only have one hope, and that is for the future generation,” says Attar. “That we give them the confidence that being a refugee doesn’t have to define them, that they can still access their dreams and become whatever they want to be in life. Because building this next generation of Syrians is what will eventually build the country.” 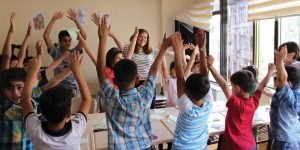 And this, says Attar, is one of the ways that concerned readers can help – by sharing their skills, stories and examples. Karam has welcomed more than 150 professionals – from dentists to artists – as mentors to young refugees, instilling hope and self-belief in those who have every right to have lost both. Looking forward, Attar is brutally bleak about the prospects of a peaceful and harmonious Syria in the near future, a fact she struggles to explain to her two daughters, aged nine and 11, who last visited their ancestral home in 2010, instead growing up surrounded by images of bloodshed. The fall of Aleppo, says Attar, signals a “return to that place of utter silence and fear,” which initially sparked the revolution.

“Now we’re reverting back to an even deeper fear, after six years of war – six years of killing, destruction and torture – Syrians are very, very afraid, as they should be,” she adds. Under such circumstances, does Attar hold any dreams of returning to Aleppo, and seeing what remains of the home she grew up in? “Absolutely – even a few months ago, I didn’t consider that a dream, I really believed it would happened,” she adds.