It is no secret that Italy is a cultural superpower. From the days of the Grand Tour, travellers have fallen in love with its impressive monuments and artworks. Yet if one ventures off the well-worn path trodden by visitors to Rome’s Colosseum or the Uffizi in Florence, another equally captivating world awaits, one untouched by vendors flogging souvenirs, maps and related tourist tat. These are the medieval hamlets, many in a state of disrepair, scattered across the countryside of the bel paese, or beautiful country.

Entrepreneur Daniele Kihlgren refers to them as Italy’s “second tier of cultural attractions” but argues they are just as deserving of attention as the frescoes one queues to see in the Sistine Chapel.

Part anthropologist, part philosopher, Italian entrepreneur Kihlgren, whose surname he inherited from his Genoa-born Swedish father, has taken the lead in drumming up interest for the borghi fantasma, abandoned or nearly uninhabited villages typically found in mountainous areas in the country’s poorer south. Waves of emigration moving north or abroad to seek work in the past century have decimated the population of hundreds of such settlements, leaving behind an ever-growing stock of ghost towns. 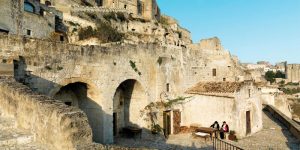 Born and raised in Milan, the 49-year-old first had contact with these neglected lands in 1999 during a solo expedition in the Abruzzo region aboard his BMW motorcycle. He stumbled upon the near-deserted hilltop village of Santo Stefano di Sessanio in the Gran Sasso and Monti della Laga National Park in the Apennines and was left speechless, not only by the outstanding beauty of the scenery but because almost everything was untouched.

“Time seemed to have stood perfectly still – no concrete buildings, no factories, no tourist infrastructure at all like you see elsewhere in the mountains with kitsch chalets. It was virgin,” says Kihlgren.

Soon after, he returned to Santo Stefano with plans to save the village from extinction. The inhabitants had dwindled from 1,400 in 1900 to a mere 70 a century later. Kihlgren invested nearly $5 million of his personal fortune, derived from a former family business making concrete for construction, to restore rundown buildings.

His vision for the medieval hamlet was to create an albergo diffuso, or “dispersed hotel”, by cobbling together the existing housing stock and carving out a reception, restaurant and guestrooms in a series of unoccupied homes, stalls and workshops that stood next to each other for centuries. After buying about 20 buildings at bargain prices – some owners had emigrated as far away as Canada decades earlier and had no desire to return – he undertook a careful renovation and opened his Sextantio Hotel. 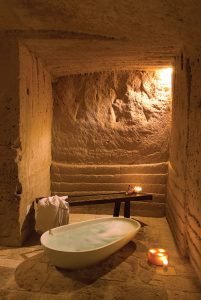 To retain the original character of the hamlet, Kihlgren relied on local materials – primarily terracotta tiles, wood and limestone – and building practices to ensure the end result was not out of place. Scouring through old photos, he and his team recreated furniture once used by villagers and relied on the oral history of locals to uncover recipes that are now prepared in the hotel’s kitchen, such as bruschetta paired with a soup of mountain lentils. The only distinctly modern addition are the sleek, egg-white soaking tubs in the guestrooms.

“The kind of clients who understand what I am trying to do here are deeply interested in history,” he says.

“They consider authenticity to be a real value in today’s world. Italy is becoming more fake. That is why when I started this project, I began as if I was setting up a museum. We want a kinder, gentler concept of tourism.”

His efforts have boosted the local economy with suppliers for the restaurant and those offering nature hikes and related services to guests emerging. After Sextantio opened in 2004, business blossomed, reviving local crafts like textile-making. It also attracted 21 new hotels, many of which followed suit and opened in disused spaces, ensuring the hamlet’s long-term survival.

To date, Kihlgren has earmarked about $43 million including Sextantio, the purchase of land in 10 other hamlets and his second hotel, an 18-room property in the ancient town of Matera in the instep of Italy’s boot-shaped peninsula. Set in a Unesco heritage site, his Sextantio Le Grotte hotel has carefully inserted accommodations inside the sassi, cave dwellings that sheltered locals for millennia until the Italian government moved residents out in the 1950s to more modern lodgings.

The rustic interiors in stone preserve the patina of these primitive dwellings. They are a far cry from chic villa-style hotels in ‘Chiantishire’ – the nickname given to chi-chi Tuscan holiday haunts – with their infinity pools and modern spas. And that is exactly the point, says Kihlgren.

“I am interested in these places as a cultural project. Too often we see in Tuscany places marketed for their folklore and history but there is no trace of the original charm. They are completely detached from the world of the local population. I want to create something that is aesthetically pleasing to the eye but also preserves what mak