Taking a stand against cyber bullying of women in Pakistan

Pakistani lawyer Nighat Dad holds workshops to teach women from her country how to fight against online harassment – Malala Yousafzai attended one too.

Long before the Taliban attacked Nobel Peace Prize laureate Malala Yousafzai in 2012, several Facebook pages were set up condemning her work. Yousafzai was one of the many female victims of online harassment in Pakistan. According to the country’s Federal Investigation Agency (FIA), there were 3,027 cases of cybercrime reported in the 2014-2015 period.

The nonprofit is also taking a stand on a larger societal level when it comes to policing the Internet and access to information. It has campaigned against legislation that gives the Pakistani government powers of online surveillance and also the distribution of personal information collected by telecom firms of its customers to sell onto foreign and domestic state agencies as well as businesses. With the increased use of surveillance technologies, DRF also provides training and workshops for media houses, independent journalists and bloggers for their own safety.

In 2015, Dad was named one of TIME magazine’s next generation leaders, for her role in helping Pakistani women fight online harassment. She founded DRF to make online spaces safe for women and provide training to ensure that they are aware of the risks involved when posting online and can use the Internet without the fear of being constantly harassed. Dad is also an advocate for stronger measures to be taken against those who engage in cyber harassment in the name of honour.

“Pakistani society is under a patriarchal system where men make all the important decisions and women rarely speak for themselves,” says Dad. Adding, “When men in the family bar a woman from using the Internet, this is when she secretly creates an account on a social networking website to connect with the world.” And this isn’t just happening in the rural areas or among families who aren’t well educated. She believes that 95 per cent of online harassment comes from individuals known to the victim. “These perpetrators are well-aware that she [the victim] won’t go up to her family or any law enforcement agency for help.” Eventually, the woman is blamed, she says and “this gives him [the perpetrator] the brazenness to continue harassing the victim.”

It’s common in Pakistan for male cyber bullies and indeed for those men who follow through and commit violent assault or murder women, to receive leniency when their defence is given as ‘protecting honour’. Qandeel Baloch, a 26 year-old rising social media star and women’s rights activist was strangled by her brother earlier this year in a so called ‘honour killing’. Baloch became a household name in the conservative Muslim country after she posted controversial photographs, videos and comments online. While her parents have disowned their son for their daughter’s murder, others in the country have been less vocal. More than 500 people, almost all of them women, die in Pakistan every year at the hands of relatives who believe shame has been brought on their family. 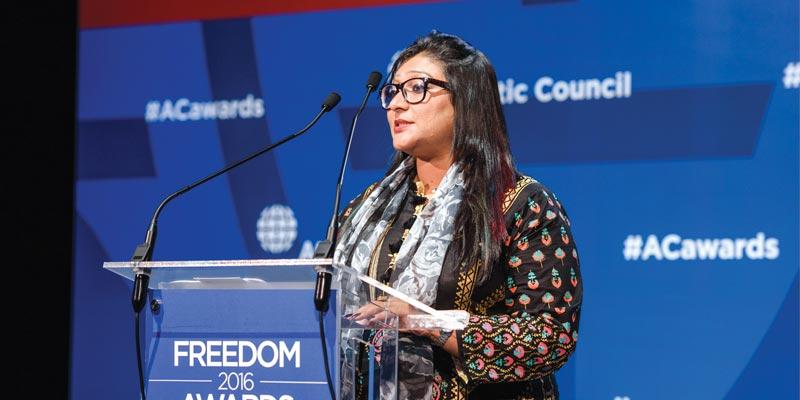 Bina Shah was a victim of cyber harassment in Pakistan.

But it isn’t just women under patriarchal pressure who are attacked online, says Dad. Various other public figures have faced similar experiences; the acclaimed Pakistani author and columnist Bina Shah became a victim of online harassment in 2014 when someone created a fake Twitter profile with her name and pictures (taken from Google and Facebook), and began to post them with degrading comments about her. The person messaged people on Twitter who were connected to her in person or online, and used the fake profile to harass and abuse them. Although these fake profiles were taken down, Shah took steps to protect her Twitter account and deactivate her Facebook profile while also limiting the content she uploaded on her personal blog.

The law and online harassment

In October this year, an assistant professor at a government university was arrested by FIA’s Cyber Crime Cell for harassing a female teacher online. The teacher claimed that the harasser had set up five fake social media profiles impersonating her in 2015 and a few months later she lodged a complaint.  The assistant professor was arrested under Section 21 of the recently passed Prevention of Electronic Crimes Act 2016, which contains a special provision for the protection of women online. Under this article, there is up to one-year imprisonment or a fine of up to Rs1m ($9,500) for forcing an individual into immoral activity, or publishing an individual’s picture without consent, sending obscene messages or unnecessary cyber interference.  Dad says that contacting the FIA is helpful, but one needs patience. “It usually takes up to two weeks for them to respond. Action thereafter depends on the case.” When speaking of cyber harassment, victims do not usually have so much time and require immediate help. “This is where FIA and government need to work on speeding the process of attending to complaints.” Still, the professor’s arrest is a strong message to harassers that action will be taken once the victim lodges a complaint.

DRF is working on the country’s first cyber harassment helpline as well as a mobile app. “What happens is that whenever a person faces cyber harassment, he or she does not know what to do. Through the helpline and app, we will attend to victims and guide them accordingly,” says Dad. “I feel that if a girl wants to survive in such a society, she should take informed decisions. She should know what she is doing and what it may lead to in the future.”