Dr Andrew Bastawrous is working towards eradicating preventable blindness in some of the world’s poorest places – using his smartphone.

Until age 12, Ted Talk fellow Andrew Bastawrous was an underperforming student whose teachers thought he had a short attention span. But, somewhat poetically for the ophthalmologist who is revolutionising the vision-impaired world, an eye test changed all of that. “It turned out I was extremely short-sighted. They were amazed I had managed to get along so well for so long at school.” Bastawrous, 36, describes the introduction of glasses as life changing. “I suddenly saw a lot of the world I hadn’t seen before. I vividly remember the walk out of the optician’s on the way home, noticing cracks in the road and leaves on trees and details on people’s faces that I had never seen. It was amazing.”

The Brit says that one crucial test altered the course of his life; and without it he would have been lucky to make it through high school. Instead, the doctor embarked on a PhD at the London School of Hygiene and Tropical Medicine (where he is now an Assistant Professor) in 2011 – and has been making waves in the optical world ever since. Bastawrous co-founded the world’s first unique diagnostic technology the Portable Eye Examination Kit – a number of smartphone-based visual assessment tools usually called by its cute acronym ‘Peek’ – after working as an eye surgeon for the UK’s National Health Service.

The ophthalmologist, whose parents moved to the UK from Egypt in the ’70s, has a grand vision: to eradicate preventable blindness. His PhD used Kenya as a base to estimate how many people were becoming blind over six years, but during the research phase it became clear how low-cost, transportable diagnostic tools were sorely needed in poorer, rural communities. Peek’s core tool is an adaptor that works in tandem with a smartphone app to give high quality images of the retina and make accurate diagnoses of visual problems. “The biggest prevalence of visual blindness and impairment is in Asia but they also have proportionally more doctors. The biggest gap in eye care need and eye care provision is in Sub-Saharan Africa.” 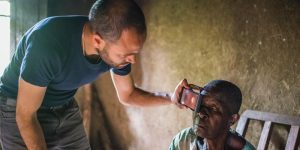 Bastawrous, recognised as a 2016 Rolex Awards for Enterprise Laureate and previously named a World Economic Forum Young Global Leader, has a hypothesis to explain why 80 per cent of visual impairment – that impacts almost 300 million people globally – is preventable. “The underlying reason that people are not seeing as well as they could is down to access and that is very much linked to poverty.”

Peek, which has so far been funded by two main donors and a successful crowd-funding campaign, including just under $100,000 that Bastawrous received from the Rolex Awards for Enterprise Laureate, has teamed up with partners in Kenya, Botswana, Tanzania and India, and is conducting research in a further five African countries. So far, the app has been used in more than 70 countries.

Cataracts are the leading cause of blindness, but according to Bastawrous: “We’ve had for decades now a very good, low-cost quick operation that can resolve sight within a few minutes.” The cost of that operation can be as low as $5 in countries with good infrastructure and plentiful medics, though can go up to about $50, he says. “For me at least it’s the most cost-effective and life-changing procedure that can be done simply and quickly. It’s such a simple thing for the absolutely majority of people to be corrected that it still absolutely shocks me that it’s the single biggest disability in the world.”

Many people needlessly stay blind until they die, Bastawrous says. He estimates that if basic correction was done for the about two billion people who could be seeing better around the world, that would amount to an economic saving of $3 trillion a year in enhanced productivity. How does this compare with the amount of money needed to perform such corrections? “There isn’t an easy figure to put on it but I can guarantee it’s significantly less than what’s being lost.”

Bastawrous says solutions must focus on enhancing healthcare systems and efficiency and delivery of services, such as ensuring specialists are only dealing with specialist cases rather than general medical problems. The developing world is where the majority of the need is – a point not lost on Bastawrous, who spent a lot of his childhood in his parents’ native country. He says had he grown up in a society with fewer health services and safety nets, his visual problem could have easily gone undetected, as even he wasn’t aware of his disability. “When you’re at the more moderate level it’s not obvious to people you have a problem. [I felt] a deep sense of injustice that I was on the very fortunate side where I was growing up with opportunities and simple interventions and in a society that was very supportive.”

Bastawrous says visual problems can hinder education, careers and even relationships – and addressing them could have huge untold ripple effects across the board. “How many people who are the biggest influencers in the world would not be where they are if it were not for simple intervention? The world would be a very different place. If you asked everyone to take off their glasses, where would we be?”