Like most billionaires Gil Dezer lives a charmed life, chock full of yachts, private jets and supercars. It isn’t a humblebrag when he says he “owns only 29 cars”. That’s because the President of the Miami-based Dezer Properties is quick to add that his father and founder of Dezer Properties, Michael, is a prolific collector who has notched up a staggering collection of over 1,200 cars. It was inevitable that the duo’s passion for automotive jewels transpired into a business project. 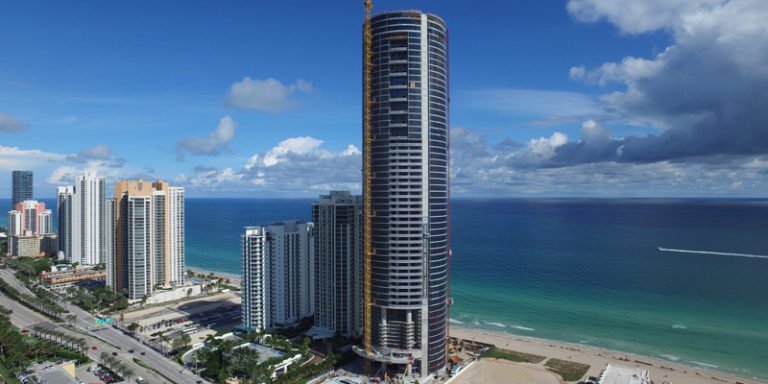 Enter the firm’s sleek oceanfront 60-storey Porsche Design Tower in Sunny Isles Beach, Florida, that is just weeks away from being completed. Designed in association with the Porsche Design Studio, the skyscraper located just a 20-minute drive from Miami, is a next level condominium. The 132-unit project has already netted $840 million in sales. Apartments start at six-and-a-half million dollars a pop and max out at $32 million for one of the two sprawling 17,000 square-foot penthouses. 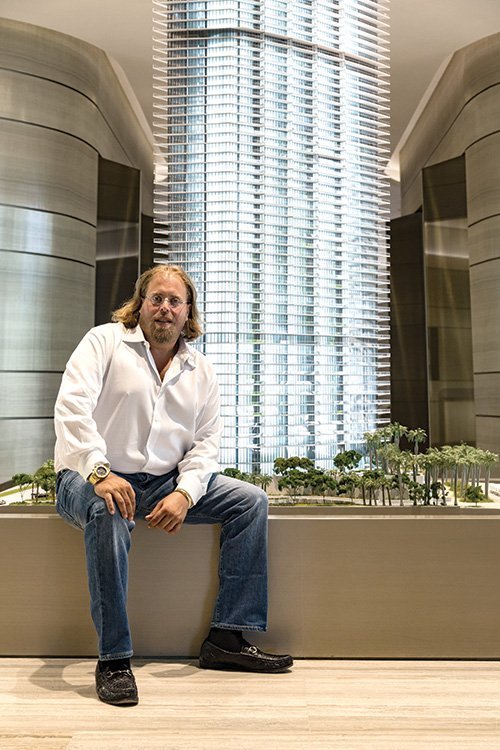 While conventional residential units will likely sell you on the idea of a plunge pool in your balcony, trendy restaurants nearby or a luxury spa and gym in your building (all of which are present here too), this high-rise floats an idea of something far more radical – the concept of parking your car in your living room. Every single apartment on every floor has at least two parking spaces (it goes up to 11 for the penthouses) for the owners to park their cars alongside the couch, separated only by a few inches of reinforced fire-proof glass for safety purposes. 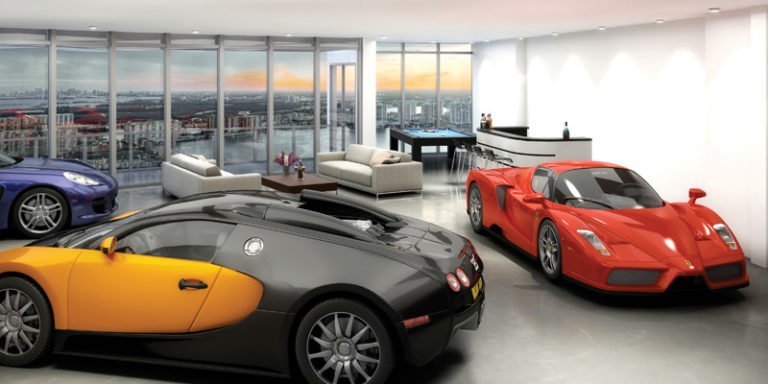 The future-proof party piece of this tower is the patented car elevator called the Dezervator. “While typical car elevators are only semi-autonomous, this one is fully automatic. The passenger can be seated in the car while a mechanical arm will lift the car and its occupants into the elevator and whisk both straight up into their apartment. We’ve put in place systems that detect if the car is accidentally left on before entering the elevator by way of picking up CO2 emissions and we’ve also installed sprinklers in the elevator as a safety measure,” said Dezer.

Reinforcing the automotive theme of the building is a special car concierge service that owners can avail of to get their cars pampered, as well as a race simulator installed on the fifth floor. For those who have more cars than they can park in their apartment, they can purchase what Dezer calls one of six “man caves” located on the third floor. These are special garages, each of which can accommodate between 4-9 cars, set up in a living room style with a bar, billiards table and a cigar lounge for the boys to kick back.

Dezer, who owns an apartment on the 32nd floor, is too discreet to reveal the names of those who have bought apartments here. Although he does hint that the list includes, “CEOs, titans of industry, oligarchs – let’s just say that you probably use the products made by at least five of these individuals every day,” he says.

With the Porsche Design Tower now a bonafide success both in terms of a project that was realised exactly how it was conceived and also one that is a proven magnet for billionaire investors, Dezer doesn’t rule out, though cautious, about replicating the concept in other parts of the world. “We would love to do the same in other cities around the world. But we cannot do it unless we have a very strong local partner.”

As the second-gen scion of a multi-billion dollar family-run real estate empire, it wasn’t nepotism that got Dezer a seat in his father’s business. “In fact, my father did not want to hire me once I finished college. I’ll never forget what he told me. He said, ‘Go out and earn your worth in the market place. Once you’ve done that, because you’re my son, I’ll pay you 10 per cent more.’ ” After completing a degree in international finance and marketing from the University of Miami in 1997, he worked in another firm for three years. “By 2000, I was drawing a salary of $180,000 a year. That’s when my father hired me at a salary of $198,000.” 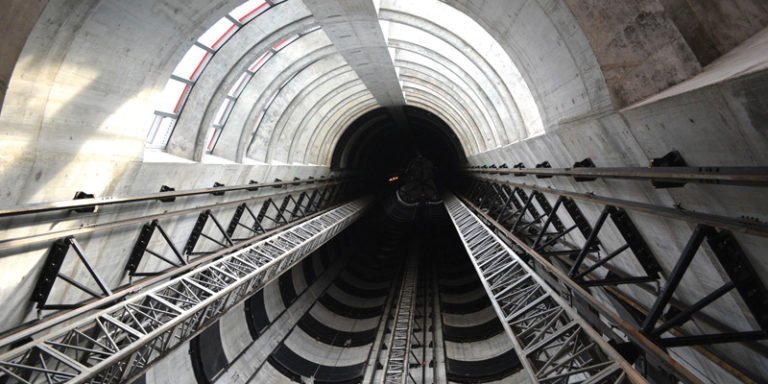 Dezer very quickly moved to stamp his own on the business and fundamentally change two core founding pillars of the company. The first was to do with location. “My father focussed his real estate business only in New York up until when I joined. But there was no reason to continue to be small fish in a big pond, whereas we could be big fish in a medium sized pond. So I convinced him to shift our business out of New York and to Miami. We began by picking up as many oceanfront properties as we could afford at the time in Miami.” The choice of location allows the Dezers to tap two distinctive, both very wealthy, client bases too. One of them is the high-rolling white-collar workforce from the financial sector living in Miami regarded as the banking capital of South America, while the other is a tribe of globe-trotting tourists who’d like a somewhat permanent outpost in the one of the world’s hippest corners.

The second seismic change that Dezer brought to his father’s firm was changing the core nature and scope of Dezer Properties’ business model. “From the time my father started out in the Seventies, he never constructed a single building. He would buy existing buildings, renovate, refurbish and lease them. When I joined, we began to actually construct new buildings and we started that in Miami.” Those early projects include six buildings constructed along with Donald Trump, who Dezer is a fan of, including Miami’s iconic Trump Towers. “We believe that he is exactly what the country needs right now and we are confident that he will become President.”

With a current shakedown of the global economy, is the Dezer luxury real estate business really in a good place right now? If you consider the numbers Dezer rattles in a single breath, it is indeed. “My father currently owns 27 buildings, which equals nearly one million square feet, in New York. We’ve already developed nearly 7 million square feet in Miami alone over the last 15 years, and that doesn’t include the nearly 1.4 million additional square feet that will be added once the Porsche Design Tower and the Armani/Casa are ready. We expect to net close to a billion dollars in sales from the Armani/Casa tower alone.”

The Armani/Casa that Dezer alludes to is his next big project, only a few paces from the Porsche Design Tower, on which construction has just commenced. Expected to be completed by 2019, the 308 unit condominium in the 56-storey building will also command multi-million price tags and is the next hot favourite for those who want in on Miami’s real estate pie, as well as the cement that will solidify the Dezer family name in the sunshine state.