Jet-setting British architect Norman Foster rarely has his feet on the ground. On one of the rare occasions that he does, GC catches up with him

He fell in love with architecture by wandering around old buildings in Manchester as a boy. Today, Lord Norman Foster is the most celebrated architect of his generation, having been appointed a knight of the realm and lifetime peer in his native Britain. He’s the founder and chairman of Foster + Partners and oversees 15 offices with 1,000 employees working on projects in 40 countries. While his portfolio includes showstoppers like Hearst Tower in New York and The Gherkin building in London, it’s his obsession with developing infrastructure and more functional transport ecosystems, such as the Millennium Bridge in London and the Millau viaduct in southern France that sets Foster apart from his contemporaries. Foster has left his mark on the world’s greatest cities in the most public manner possible — here he tells us about the new technologies that will improve city living in the future.

Lord Foster, you are one of the most famous architects in the world and you had a very interesting and unusual start. How did you become an architect?

Working in Manchester in my first job at the age of 16, I spent every spare minute wandering around buildings in the city. I wasn’t consciously thinking, ‘one day I am going to be an architect, therefore I should be doing this.’ I was just drawn to buildings for the aesthetic experience. Some buildings and parts of that city were particularly inspirational – the cast iron tradition of Barton Arcade, the Victorian architecture of Manchester Town Hall or the modernist Daily Express building, for example.

When I returned after my National Service, I began looking for a job that appealed to my creative side – drawing had been a serious passion for me throughout my childhood. I had always been fascinated by design, and a short stint at the contracts department in a local architect’s office spurred me on to build my own portfolio of drawings. It was this journey of self-discovery that led me to apply to the architecture programme at Manchester University. 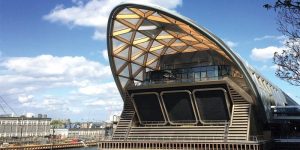 The tropical garden and roof structure designed by Foster sits above the Canary Wharf Crossrail Station in London.

Who was your first mentor?

The people I was exposed to at Yale, in particular Paul Rudolph, Serge Chermayeff and Vincent Scully, were hugely influential. Paul Rudolph created a studio atmosphere that was highly creative, competitive, and spurred on by a succession of visiting critics.

What was the first building you worked on?

The Retreat was an early project that we carried out as part of Team 4 in 1964. The clients were Marcus Brumwell and his wife Rene, who had earlier commissioned us to build the Creek Vean House. The structure strips the notion of a house down to its very essence – a place of shelter. Fanning outward from a notional source within the earth, the gazebo breaks surface from the slope of the bank, and faces towards the sea, like the cockpit of a plane, maximising the views of the waterfront. A simple glazing frame, the structure was inspired by the distinctive sliding canopy of the Hawker Hurricane, which was a remarkably agile wooden framed fighter plane from the 1930s. These varied references were distilled into a minimalist glass bubble – a cockpit looking out to views of the Fal estuary – an away place in which to read, contemplate or have picnics.

Each architect has his own style. How would you define yours?

I have never subscribed to a particular style; each project is a unique response to the site, and its physical and cultural context. The values and philosophy are the constants. Design is always a collective effort, so perhaps you could say that the style is that of Norman Foster with his various teams. However, I do have some core beliefs: the quality of design affects the quality of our lives, a commitment to the principles of sustainability; and a continuous tradition of questioning, challenging and innovating. I also have a fascination with technology as a means to social ends.

You have built public buildings, airports, homes and skyscrapers. Are you keen on building skyscrapers or do you believe they are now obsolete?

I love tall buildings as much as low-rise structures. I do not believe that skyscrapers are now obsolete – I have often argued that denser cities are more successful and sustainable. Higher density does not mean we have to build tall. On the contrary however, skyscrapers can play an important role in the city when designed and planned for sensitively, as well as being considered in the wider context of transport.

What is your idea of the city today? Are you concerned by the ever-increasing transportation problems?

On the contrary, I am very excited by the prospects of new technologies that offer sustainable, quiet, and fast alternatives for transport that could transform cities for people. The issues of transportation we face in cities today are eminently solvable if we just take a bold approach towards infrastructure – just as our Victorian forbearers did in 19th century Britain.

Over the centuries there were architectural styles and fashions, from ancient Egypt, the Greeks, the renaissance, the baroque, Bauhaus and Italian fascist. Is there a style of today? Or is each architect simply doing whatever he or she wants?

I think you need the perspective of time to be able to analyse the attributes of a particular time period. It provides a certain clarity that is not possible in the heat of the moment. For example, what we today call Gothic or Baroque were not so clear-cut at the time. It is only after having the benefit of viewing the works of those time periods from a distance that historians have categorised them.

Foster designed The Swiss Re Tower, better known as The Gherkin, in London.

What do you think about the countries who have erased their own past? Beijing has destroyed its own past, unlike Rome. Is it a crime?

It is important to find a balance between new and old. I have always said that the true challenge of renewal is to continue the historic tradition of change, but with a sensitivity to the spirit of the past.

What do you think about the destruction of wars, from Dresden to the Twin Towers to Palmyra and Aleppo? Antiquity is menaced by such acts. How do you feel about it and the rebuilding of these cities later?

Such losses are tragic and horrific. As an afterthought, perhaps our awareness of the vulnerability of true antiquities should lead us to record them properly for posterity.

How do the climate change debates and recent seismic catastrophes impact architecture?

Climate change is a very serious issue and sustainability is not a matter of fashion, but of survival, affecting architecture and infrastructure at every level, be it an airport or a small apartment. Sustainability requires us to think holistically and not about buildings in isolation. The location and function of a building; its flexibility and life-span; its orientation, its form and structure; its heating and ventilation systems, and the materials used, all impact upon the amount of energy required to build, run and maintain it and the movement of goods and people to and from it. Architects cannot solve all the world’s ecological problems, but we can design buildings to run at a fraction of current energy levels and we can influence transport patterns through urban planning and infrastructure.

You recently built, at a cost of $5 billion, the new HQ of Apple in California. Do you like working in Silicon Valley? You do a lot of work in the high-tech world – how is it to work with such conceptually advanced people?

As an architect I am grateful for enlightened individuals who commission buildings. The more passionate they are, the more demanding they are likely to be – which is positive. Some are in Silicon Valley, some are in lots of other places. It is about the individual not the place.

When you make a project, is your foremost concern aesthetic, or is it – for example – security, or usability?

Every project begins with research, and a return to first principles. You have to evaluate the site, its physical setting, climate, the culture of the place, the needs of the user – each of these aspects determines the final outcome, which is different every time. Let’s just say that it is impossible to separate how it looks from how it works from how it is made.

Since you began how much has changed in architecture? And are there new young architects that you praise today?

I praise all architects of talent, young or old, dead or alive. We all have to appreciate talent. The ends of architecture and core values have not changed. The means and technology have – and they will continue to do so.

For a number of years now, even if you are based in London and spend much time in St Moritz, can we say that your main house is your private plane? How much has your passion for flying changed your professional life?

For as long as I can remember I have been fascinated by flight. Relatively late, in my thirties, I started to fly. First sailplanes, then single engine light aircraft, then helicopters, then piston twins, then historic aircraft, then jets. So flying has been, and still is, a way of life.

The idea of how human beings inhabit space varies across the world. In Japan for example the space for a human can be very small. How do you feel about that?

It is not about the amount of space – it is the quality of the space.