Behind bookshelves in the capital’s mega-mansions are bulletproof rooms with anti-intruder systems, steel walls and satellite phones

It’s bedtime but Nessa Stein, the businesswoman played by Maggie Gyllenhaal in the BBC’s political thriller The Honourable Woman, walks past her immaculate pale green bedroom with its plump pillows. She bypasses her 1920s dressing table, pulls on a silk Bodas slip, then swipes her fingers on a monitor to make a false wall open up. It reveals an artificially lit white cubbyhole, where she curls up in bed. It’s her panic room.

This strange bulletproof cube might seem a fictional idea, yet demand for these so-called safe rooms is soaring in the capital – not from fearful individuals worried about the ramifications of political careers spilling over, as with Stein’s character, but from super-rich banking families, stalker-scared celebrities, and cash-hoarding foreigners who want an anti-ballistic space to call their own.

You’ll probably never hear anyone name-drop their panic room as the Kensington crew do about their triple-storey basements, but one prime London agent claims nearly every single one of the capital’s mega-homes – the ones five times larger than the average Zoopla listing, found around Hampstead’s The Bishops Avenue and Belgravia’s Eaton Square – hides a panic room within its four walls. That’s despite the average safe room starting at $98,000 and costing as much as $3.27 million. As the agent puts it: “That’s a lot of money for you or me, but if you’re spending $24 million building a house, it’s not.”

The first rule of panic rooms is you don’t talk about your panic room. They’re hidden behind standard-looking doors or bookshelves. They’re never part of the show-off house tour. “You don’t advertise it in your house’s particulars, you don’t talk about it on the golf course,” says one foreign tycoon living in London, who immediately breaks his own decree by whispering he’s had one installed. “It’s not like the basement swimming pool or the retractable-roof tennis court – it’s low-key, it’s there for the security.”

The billionaire had his panic room built soon after his first child was born – “you want to protect them, y’know?” For most parents, that means splashing out on a top-of-the-range baby monitor. For the super-rich, it’s a concrete bunker with nuclear, biological and chemical attack protection.

There are two types of safe rooms for the average zillionaire: one is that underground, concrete cell (anti-radiation as standard, but it’s an extra $147,000 for nuclear protection. One developer tells me that’s a far more popular choice in New York than in London). Or there’s the more common anti-intruder panic room. This is the one you might think is a dressing room or bathroom, unaware that the fluffy Roberto Cavalli towels are hanging off ballistic steel wall panels, or that the racks of designer dresses and suits are the architectural equivalent of Superman, a safe room in disguise protecting people from burglars and bombs.

The wealthy spend a lot of money on the room they hope never to have to enter. Tom Gaffney, president of safe-room specialist Gaffco Ballistics, says: “The panic room has the same finish as any other room in the house. Clients aren’t going to go with lino floors when the rest of the house is white quartz – they spend the money.”

Inside, the “most important thing in a panic room is good communication”, says Paul Weldon, founder of The Panic Room Company, the name behind many of London’s safe rooms. “It might be a simple mobile phone or iPad or satellite phone but you need to stay in touch with police or your own security services. The CCTV is linked to the room too, so the occupants know what’s going on outside.”

The priciest panic rooms have their own air supply, a filtration system to keep out poison gases, independent lighting and plumbing systems, heating and an alarm keypad, all powered by a generator, plus emergency food stocks. It’s more war rations than Whole Foods: freeze-dried meals and tinned meat with bottles of water are the norm. The anti-intruder panic rooms beside bedrooms are only designed to protect their occupants until help arrives – up to about an hour – but bunkers can keep them fed and watered for as much as a week. Most US panic rooms host a secret compartment for a gun. In the UK, homeowners are asked to pick their ballistic protection – a wall that will stop a shotgun’s ammunition, or one that will prevent armour-piercing rounds.

“I’m building a room for a client who wants to store artwork worth hundreds of millions of pounds in it,” says Weldon. “It’s a vault and panic room – individuals don’t trust banks as much as they used to and prefer to have the security in their own properties to look after their most valuable items.” Then there’s the fact that as people get wealthier, “they get more paranoid”, adds Weldon. “They worry about a basic theft turning into something much worse – a panicked burglar who wants money and jewellery finding the occupants in and ending up stabbing or shooting or kidnapping the kids. We advise people to get into their panic room, contact their security and let the intruders ransack the house while they’re safe – that stuff can all be fixed.” 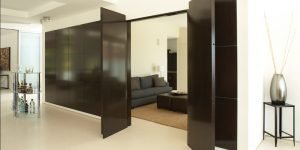 The first rule of panic rooms is you don’t talk about your panic room. They’re never part of the show-off house tour.

Gaffney says his super-wealthy customers regularly contract “a safe room for every house” – one for London and another for the Hamptons or the Middle East. “Affluent families, the top tier of the business world and celebrities, want a sense of security,” he says. “I’m seeing more and more demand at the moment.” The September 11 terrorist attacks were the first stimulus: before then, his company built 25 safe rooms a year; within 12 months, that shot up to 200. Now it’s a steady 50 panic rooms a year.

In the UK, the Queen led the way, installing panic rooms encased in 18in thick, bullet-resistant, fire-retardant steel walls at Windsor Castle and Buckingham Palace more than a decade ago. The royal panic rooms are designed to withstand poison gas, bombs or terrorists attacks; they are equipped with secure communications, beds, washing equipment and enough food and water for the royals to survive for at least a week. And Kate and William’s royal apartment at Kensington Palace includes a panic room with an air filtration system, guarding against biological warfare, and an escape tunnel.

But locking yourself in a so-called safe room can have the opposite effect. Billionaire banker Edmond Safra died of smoke inhalation in the panic room in his Monaco penthouse after being convinced by his butler that dangerous attackers were waiting for him outside, when the property was in fact on fire.

That has not put off the super-rich or the biggest institutions. Bullet-proofed “safe” boardrooms are another booming industry: while middle management suits might think there is nothing special about their meeting rooms, many a board has opted to rip out the beige carpet and walls over a weekend, replace them with armoured steel slabs and have it back to normal for Monday. Some panicked high-profile chief executives have paid as much as $16,000 for bullet-resistant podiums, transported to wherever they give speeches.

“Much of the demand comes from foreigners in London,” adds another safe room specialist. “They come from countries in Africa or the Middle East that are very unsafe and here they want the man on the gate, the CCTV, the underground beam detection, the perimeter alarm and the panic room. They don’t realise how safe London is.” And that’s just how the booming panic room industry likes it.