Is Dubai ready for an eight-star hotel?

The Bulgari Hotel slated to open later this year will have the city’s most expensive room rates and has the Burj Al Arab in its sights.

Now we know there isn’t anything such as an “eight-star hotel” in as much as the Burj Al Arab’s “seven-star” billing was really the figment of a creative journalist’s imagination, during a press trip to that property a few years ago. Then again, we couldn’t find the an appropriate descriptor for the upcoming Bulgari Hotel, due to open later this year, that will have room rates higher than the Burj Al Arab (that are priced at an average 10,000AED a night) and rank at the very top of luxury hotels not just in Dubai, but worldwide. 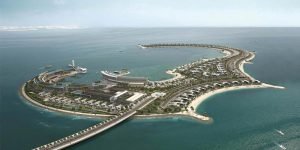 Located on the seahorse-shaped Jumeirah Bay Island, the Bvlgari Resort and Residences property is a 1.7-milion square foot development.

Located on the seahorse-shaped Jumeirah Bay Island, the Bvlgari Resort and Residences property is a mammoth 1.7-milion square foot development built in partnership with Dubai’s Meraas Holding. The hotel will include 100 rooms and suites and 20 residential villas. In addition, the island will also include 165 serviced apartments consisting of one-to three bedrooms, another eight penthouses with four bedrooms each and fifteen three-to-six bedroom mansions for those who want to stay for longer periods.

There will be a total of seven restaurants on this island, but the most exclusive will be a sushi one located on the hotel’s topmost floor that can accommodate a maximum of just eight people. Expect the usual luxury amenities that come along with a hotel at this scale including 24-hour concierge service, pool, fitness areas besides access to the world’s first Bulgari Marina and Yacht Club. 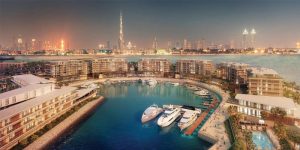 Guests at the hotel will have access to the world’s first Bulgari Marina and Yacht Club.

Details on the interiors and other design elements of the hotels, which will undoubtedly be opulent, are scant other than Italian architects Antonio Citterio Patricia Viel and Partners are commissioned for this project.

Bulgari’s been on a spree in the luxury real estate sector and has been opening properties across the world on a war footing. These include two new hotels, one each in Beijing and Shanghai, due to open this year with another one announced to open in Russia in 2019. New York and Rome are also rumored to be on the Italian brand’s hit list. The question is will any of them be as fabulously ambitious as the property in Dubai?