The $30million apartments in the 80-storey tower will be able to rotate 360 degrees.

Dubai has some of the world’s most ambitious real estate and infrastructure projects. The world’s biggest shopping mall, the world’s tallest building (with another one that’ll be even taller already under construction), a driverless metro system, and a planned hyperfast inter-city transport system. But there’s one that’s set to be the ultimate game-changer.

The city will soon feature the world’s first rotating skyscraper. Referred to as The Dynamic Tower, architect David Fisher is tasked with designing this project. “It is the world’s first tower designed in four dimensions. In other words, it’s the world’s first building to constantly change shape and will never look the same. I call this building designed by life, shaped by time,” says Fisher. 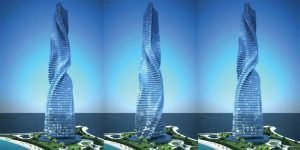 The core of the building will remain stationary, and residents can take the elevator built into this core to reach their apartment. The construction calls for some ingenious engineering too. This will be the world’s first pre-fabricated tower, wherein individual units will be built off site including their plumbing and electric connections, brought on site and then raised to the desired floor along the core.

The building will also be an eco warrior. It is designed to be its own power station and will depend on renewable energy as its source. Fisher’s team will install wind turbines in between each floor that will in turn power up the building.

Living here comes at a significant premium. Each apartment will cost $30million and the tower is expected to be completed by 2020. Indeed, a revolutionary idea.