The most expensive home in the US is up for sale

The $250 million home includes a helicopter, $30 million worth of cars and a curated art collection as part of this mega deal.

Nearly nine years after being responsible for the crash that nearly forced the American economy to go belly-up, the country’s real estate sector is witnessing a boom time. That especially holds true for the very top end of the market, the likes of which include the recently opened $800 million Porsche Design Tower in Miami where an apartment can cost upto $32 million, as well as the multi-million Aston Martin luxury condo also being built in Miami. 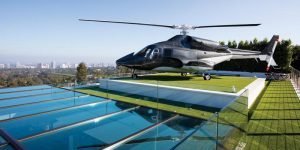 The helicopter comes along with the apartment.

But the deal that dwarfs all other projects in America to date is this $250 million property that has been recently listed by real estate tycoon Bruce Makowsky of the BAM Luxury Group, making it the most expensive home ever listed for sale in America. Located in Bel Air, it took him four years and a team of 300 people to build this 38,000 square foot mansion that features 12 bedrooms, 21 bathrooms, three kitchens, five bars and two fully-stocked wine and champagne cellars. 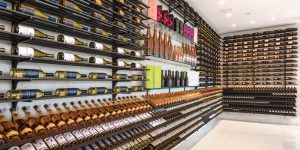 There are two full-stocked champagne and wine cellars.

In an exclusive telephone interview with Global Citizen, Makowsky said, “We have a bowling alley, spa, gym, 40-seater indoor theatre as well as an outdoor theatre, and over 130 art installations. The helicopter on the roof also comes with the apartment. There’s $30million worth of cars – including a brand new Pagani Huayra, a Bugatti Veyron special edition and a couple of vintage cars including a 1936 Mercedes 540K valued at nearly $15million.” 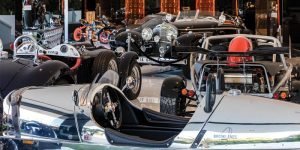 There is a $30 million worth of car collection including vintage gems and supercars as part of the deal.

For the billionaire investor that snaps up the home, there’s a $2 million 18-foot-wide hydraulic screen that rises up over the 85-foot infinity pool and the elevator to move between the four stories is lined with alligator leather – or you could take the $2million handcrafted steel staircase.

Makowsky, the aesthete, has also curated an extravagant art collection. “About 15 per cent of the art in the house are bespoke pieces created by my team just for the apartment. The remaining is from what I’ve seen and collected from exhibitions like Art Basel, as well as from all over Europe.” 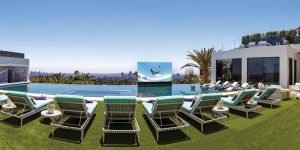 The 18-foot screen that rises above the 85-foot infinity pool alone costs $2 million.

The apartment comes with a full-time staff of seven including a chef, fitness instructor, security and house manager – all of whose salary has already been paid for the next two years. “The last three houses that I’ve sold were all to billionaires from outside the United States and they really appreciated the fact that I hired staff for them too,” says Makowsky. 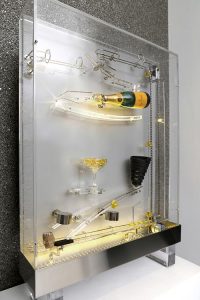 This pinball machine with Verve Clicquot champagne is part of the curated art collection within the apartment.

So what’s next? Makowsky is guarded about the details, but says that he’s currently working on two more homes that will be bigger – and more expensive – than this property. Are we talking about America’s first billion dollar home?


Warning: chmod(): No such file or directory in /home/customer/www/global-citizen.com/public_html/wp-includes/class-wp-image-editor-gd.php on line 507