Arvid Rosengren’s healthy obsession with wine has put him at the top of his game.

If you want to understand what it is to be obsessed, take a trip into the world of Arvid Rosengren.

The winner of the World’s Best Sommelier competition studied for five years to compete in the prestigious event this spring, where he beat 59 other people from 58 countries. Every day since 2011 he spent two hours each morning learning 16,000 flashcards covering everything from vineyard law in Chile to all the regions of Bulgaria.

Rosengren hired an acting coach to look more confident whilst on the floor of a restaurant. And almost every day he would do a blind taste test where he had to identify four wines in four minutes without seeing the labels, often filming himself and sending the footage to his coach.

Along the way Rosengren lost contact with friends, broke up with his girlfriend and had to explain to his family that for the next half decade his priorities lay elsewhere. Fortunately for Rosengren – and his mum and dad – he did exactly what he set out to do.

As we meet a month afterwards, Rosengren admits that he has not gone back to the books since his victory in Mendoza, the winemaking region of Argentina. He is trying to calm down a bit too and is down to three coffees a day instead of eight expressos he was on before.

Looking back on the last five years, he says: “Yes, it was super obsessive and was not great for many social relationships.

“In my free time I did this, that’s all I did. It’s been a long time since I sat down and read a book that’s not about wine or watched a movie outside of an airplane.

Rosengren is extremely driven, but he is also very clear about the role of the sommelier, which he thinks needs an image change. When he won the competition he told journalists that it was a “victory for hip hop and wine”, on account of the music they play at Charlie Bird, the restaurant in Manhattan where he works and where we meet.

At work Rosengren wears an open neck shirt, jeans and sneakers which makes him look more like a tech startup founder than a sommelier.

Rosengren says he thinks it is a big step for the industry that “a guy like me can go and win the competition and they will accept that”. He says: “The people judging are for the most part classic european Michelin star restaurant guys. This is how I look when I work. That’s representing of a sort of movement in the restaurant world in New York, London and Paris.

“Restaurants where the wine drinkers go to drink wine are probably not going to be an ironed linen, penguin suit restaurant, it’s going to be a casual, fun place where they happen to serve great wine in a friendly atmosphere”.

The role of the sommelier has changed enormously over the past 10 years and for many their reference point is the 2012 documentary Somm, the industry nickname for sommeliers.

The film followed candidates competing for the Diploma from the Court of the Master Sommeliers, an exam similar to the World’s Best Sommelier which only 200 people have passed in 40 years.

Rosengren says that now he wants to take the wine industry a “step further” from Somm to make it “more democratic”. As such, at Charlie Bird there are 120 wines on the main list with none more expensive than $300. On top of that there is a separate list for those who want to spend more, some 1,000 selections from $300 up to about $3,000. 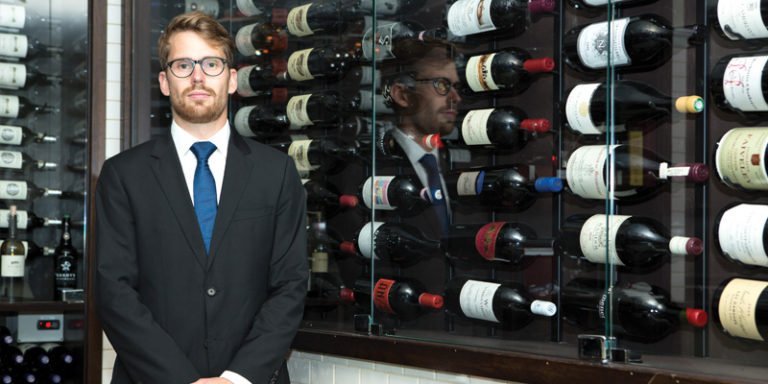 Rosengren says: “There has been too much of that excluding mentality, you can never get a table, you can never get in unless you know someone. “You cannot afford to buy anything good off the wine list. We’ve designed an experience here, it’s hard to get in, it’s a busy restaurant, we always leave room for walk in’s”.

Rosengren grew up in Malmo, Sweden, and puts his interest in hospitality down to cooking for his siblings from a young age. He studied nanotech engineering at university but didn’t like lab work and decided to become a sommelier after working in a wine shop. He began entering competitions in 2009 when he won Best Sommelier of the Nordic Countries, followed by Best Sommelier of Europe in 2013 among others. But he became restless with his job in Copenhagen working for a chain of restaurants because he was sitting in front of a computer all day. He decided his last competition would be the World’s Best Sommelier contest, which takes place once every three years and is notoriously tough.

The competition was spread over four days with multiple rounds of blind tastings, theory exams and a mock restaurant part when entrants are judged on their service skills. During that final stage the judges tried to fool Rosengren with a fake bottle complete with mocked up label.

Rosengren says that he was genuinely surprised when his name was read out and is not yet comfortable with the celebrity it brings. For now he plans to keep his feet on the ground and in addition to his work at Charlie Bird is running a wine consultancy service with the restaurant’s owners called King St Sommeliers.

Rosengren describes it as a private consulting service of curating wine cellars, handling valuations and organising purchases for people “who want their wine to be as good as their art collection”. He still works the floor at Charlie Bird and loves the ‘30 second psychology’ involved in guessing what a diner wants.

Rosengren says he also understands arguably the most important part of the job – knowing when to shut up. He says: “Some people want to make sommeliers into the rock star chefs. I don’t think that’s going to happen and I don’t think it should happen.

“We’re in a different situation. We perform a service and we’re best at doing that. Do it well and then get out of the way because people are in your restaurant to engage with who they’re with.”