Plans have a habit of going out of the window when you’re a documentary filmmaker. For example, when British director Orlando von Einsiedel and producer Joanna Natasegara began making their 2014 feature Virunga, it was supposed to be an inspiring tale of park rangers protecting gorillas in the Congo. Instead, it evolved into a multi-faceted feature that was as much urgent investigation (into the activities of the British Oil company Soco International) and political drama as it was a conservation study. The end result received universal acclaim and earned an Academy Award nomination for Best Documentary Feature. Now von Einsiedel and Natasegara are back with their new documentary, The White Helmets: a heart-wrenching look into the daily operations of a group of volunteer rescue workers of the Syrian Civil Defense.

And once again, the British duo had to think on their feet. What was initially planned as a full-length feature instead became a short film (40 minutes) when the pair realised they needed to get their story seen as soon as possible. “We very quickly began to feel uncomfortable with the idea of taking two or three years to make a feature,” admits von Einsiedel, “when what is going on on the ground is so urgent. Ultimately, it felt as if this film needed to be made as quickly as possible.” 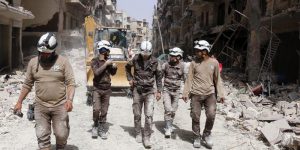 The shorter length has not diminished the film’s impact or acclaim. It was nominated for Best Documentary Short at this year’s Oscars. And deservedly so. With an unflinching eye, the film follows a group of volunteer workers, known as White Helmets, as they risk their lives on a daily basis trying to evacuate civilians from the rubble and debris of fallen buildings following the latest bombings in the war-torn Syrian city of Aleppo. The viewer gets to see, in grim detail, the tragedy of the situation, the stark realities, and the ever-present dangers of digging through rubble in search of bodies that may or may not still be breathing.

But, despite the horrors, the film manages to uplift and inspire, primarily because of the extraordinary bravery and spirit of the White Helmets – ordinary men doing extraordinary work with a humility and quiet hope that is remarkable. “We found them incredible,” admits von Einsiedel. “We heard about them through friends who had worked with them. And we were immediately drawn to this group of ordinary civilians who had banded together to risk their lives every day to save strangers, effectively. It’s a story of heroes and a story of hope and that’s what really drew us in.”

Neither von Einsiedel or Natasegara are strangers to conflict but Aleppo, where journalists have been kidnapped and beheaded, was always going to be a logistical challenge. It quickly became clear that to enter the city would endanger not only the film crew but also the White Helmets. Instead, the filmmakers shot on the team’s training course that sits on the border of Syria and Turkey and collaborated with the White Helmets to gather footage from Aleppo. “We worked particularly closely with a White Helmet named Khaled Khatib,” explains von Einsiedel. “He was a teenager when the conflict started and has been documenting it for the past five, six years. He began on a mobile phone and progressed on to better cameras.”

“We paired him with our cinematographer,” adds Natasegara. “And kind of trained him in the way that the film would look and feel.” Natasegara and von Einsiedel ended up with over 60 hours of footage, although they were judicious with what made the final cut. “What you see in the film is like one per cent of the horror,” said von Einsiedel. “If we had included more, it would have been too upsetting; nobody would watch it.”

“The emotional toll was pretty intense for the whole team,” admits Natasegara. “Most of the footage we received from the White Helmets was incredibly graphic and upsetting. And even when we were in Turkey with them, they would get phone calls and messages to update them on what’s going on… it was kind of a relentless horror making this film that really stays with you.” 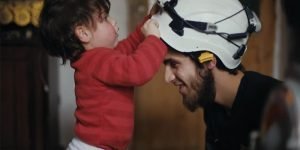 And do the filmmakers see any end in sight to the conflict? “The short answer is no,” says Natasegara sadly. “But we’re not experts in the politics of Syria. We purposefully tried to focus on the human story because so much of the news is about the political situation.” The pair remain in touch with the White Helmets and admit to worrying about their well-being on a constant basis. “With any of the films we make, we make close bonds with the people in them,” says von Einsiedel. “And we stay in touch with everybody. The sad thing is the last few months have been incredibly difficult for all of the White Helmets but especially those in eastern Aleppo because it fell to the Syrian government over Christmas and so Khaled and Mohammed Farah and Abu Omar, the central figures in our film, lost their homes, and everything they had. They had to flee with their families. In fact, about 150 White Helmets had to flee. Most of them are now in other centres where they continue to do rescue work.”

Getting an Oscar nomination seemed to offer a welcome opportunity to catch up with some of the White Helmets at the Academy Awards… until news of President Trump’s travel ban emerged. “The executive order came two days after the nominations were announced,” recalls Natasegara. “What was sheer delight about being able to bring Khaled and Raed [Al Saleh, leader of the White Helmets] to the world’s biggest stage, turned into total dismay. For two weeks it was a rollercoaster until eventually it was confirmed that they had got their visas to attend.” However, on the night of the Oscars things didn’t go to plan and it was a bittersweet moment for von Einsiedel and his team when they took to the stage at the Academy Awards to receive the Oscar for Best Documentary Short without Khatib and Al Saleh — Khatib was detained enroute to LA on Saturday and therefore missed the ceremony and Al Saleh decided to stay back in Syria to work as there had been an increase in bombings.

It’s fair to assume the filmmakers aren’t fans of Trump’s initiatives. As Natasegara observes “We feel that these are some of the finest humanitarians of our generation and the fact that a travel ban like that could affect them just really shows what the ban actually is.” The duo are already planning their next project, although they won’t yet be drawn on what it is. “It’s too early to talk about yet,” says von Einsiedel apologetically. “But you can expect more of the same: stories about brave people doing incredible things.” With perhaps a few last minute surprises and changes along the way.