How Vilebrequin became a swimming success

The chief executive of the luxury swimwear brand Vilebrequin is tanned, smiling, relaxed and dressed in chinos and a printed shirt – not what you would expect someone in his role to be wearing.  But then again, Roland Herlory is not a typical, ruthlessly competitive CEO. After 20 years at the luxury goods company Hermès, Herlory decided to take a step back from his senior position scouting for ideal sites around the world for the relatively low-key role of a store manager at the branch in St Barthelemy island, better known as St Barts, in the Caribbean. 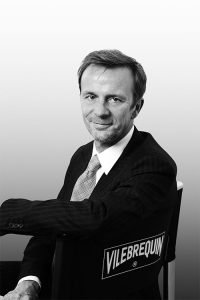 “I love working and I love breaks. I needed to regenerate my desire and my mind,” says the Frenchman. “I love the excitement of action and power of moving things – but I do not like dependence.” Herlory has taken these breaks frequently in his career, taking time to reflect and recharge before re-entering the workforce at full speed. He credits this methodology to his career’s longevity and success.

“I took the time to recover, to get grounded. The desire to go back to simple things was stronger than career status. I did fear losing career traction but the fear was not strong enough to change it. Those breaks were some of the best decisions of my life. When you follow your intuition and your inner voice, when you go back you’ll be stronger.”

During his time in St Barts, Herlory, who is naturally easygoing and congenial, excelled at sales. Legend has it one woman’s American husband demanded to “meet that guy who’s selling so much to my wife.”

That man was Morris Goldfarb, chairman of G-III Apparel Group, the licence holder for a string of fashion brands such as Levi’s, Calvin Klein and Tommy Hilfiger. When Goldfarb added the French brand Vilebrequin, which counts Prince William and Jay-Z among its fans, to his portfolio in 2012, he asked Herlory to head the company. Herlory was reluctant to jump back into the rat race so he negotiated a dream deal – to run the brand and its outlets from Miami to Shanghai remotely from St Barts.

Vilebrequin was founded in 1971 by the motor racing journalist Fred Prysquel, who named his company after an engine crankshaft. “The decision to start the brand was motivated by love,” says Herlory, adding Prysquel was attracted to a woman but did not have the body for Speedos, the trend at the time, so decided to design something himself.

Influenced by California surfers, he created a longer swim short using colourful spinnaker fabric. The shorts were an instant hit in St Tropez.

“I love the idea that he started the shorts just to impress a lady, not to start a business – but it became a business,” says Herlory. Prysquel eventually got his happy ending and married the woman he was pursuing. 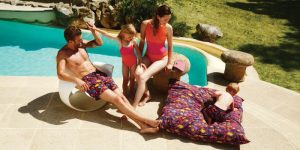 Since Herlory joined the brand three years ago, he has embarked on a strategic initiative to turn the company into more of a lifestyle brand, adding a women’s collection and accessories such as sunglasses, bags and shoes.

“Today when we make a product, we think, ‘are we being authentic to St Tropez in the 1970s? Do we have the touch of craziness, French elegance and a bit of fantasy and freedom?’ ” says Herlory. He often references Brigitte Bardot and her friends in the film And God Created Woman when speaking about the brand and its colourful prints.

Today the Middle East accounts for 10 per cent of global sales, with branches in Mall of the Emirates, Dubai Mall and the Souk Madinat Jumeirah. “It is summer all year long and there is a steady flow of tourists coming to enjoy the sun, the warm climate, the beach and the pool,” says Herlory. “We are a logical choice for these people.”