Royal Jet’s new CEO, Rob DiCrasti, is a veteran of the private jet business so it seems only fitting that we meet at 30,000 feet on board the company’s brand new 34-seater Boeing Business Jet (BBJ). Before getting down to business, DiCrasti gives a tour of the new aircraft, which was kitted out by Lufthansa Technik. It includes a master bedroom with an en-suite bathroom, lie-flat seats, mood lighting, independent iPads for personalised entertainment, and gourmet food options. Basically everything ultra high net worth individuals who pay top dollar would expect. It costs anywhere between $10,000-14,000 an hour – a single hop to London from Abu Dhabi could cost $150,000.

DiCrasti was first schooled in the aviation game when he joined Saudi private aviation company Nasjet in 1999 and went on to become their CFO and deputy CEO setting up their business in the kingdom. “I went over to the NetJets guys in the US and they taught me the business – everything from setting up fixed base operations (FBOs) to aircraft management and licensing.” 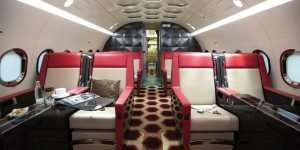 But a few years into his stint, DiCrasti decided to move to western Canada. However, the private aviation business wasn’t as ripe there, so he shifted career paths and dabbled in consulting, real estate and hospitality – fields that played on his strength as a B2C specialist. A few years later when CHC Helicopters offered him the chance to head up its Nigeria operations, DiCrasti knew it was his chance to re-enter a profession that he knew only too well. It was from there that he landed the job as the CEO of Royal Jet, jointly owned by Abu Dhabi Aviation and Presidential Flight, the UAE’s royal flight service. “When I was with Nas, I followed Royal Jet quite closely, not as a competitor but because they were an interesting organisation. I even almost came to join them a few times. So when the offer came up, I knew it was the right timing.” 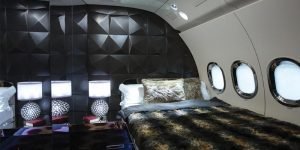 Royal Jet now own eight Boeing Business Jets making them the single largest operator of BBJs in the world.

DiCrasti though is a pragmatic voice and warns against reckless expansion. They now have eight BBJs – the single largest operator of BBJs in the world – two Bombardier Global 5000s, one Gulfstream 300 and two Lear 60s. “The days of ordering aircraft and then filling them up are over. You’ve got to have a sustainable business model. We had smaller aircraft in the fleet that weren’t sustainable, so now they’re parked and for sale.” DiCrasti is also combating the slowdown by a diversification model that he says will help them to “get a bigger piece of a smaller pie.” By way of that model, Royal Jet has opened up an FBO in the Seychelles, as well as focusing more on medical evacuations and aircraft brokerage. They’ve also embraced new market trends and offer their aircraft for charter to private jet seat sharing companies like JetSmarter.

If Royal Jet’s decision to expand with the induction of the latest two BBJs – one of which we found ourselves aboard – that joined the fleet after DiCrasti’s appointment is any indication, the business model isn’t just well grounded, it’s tooled to take flight.